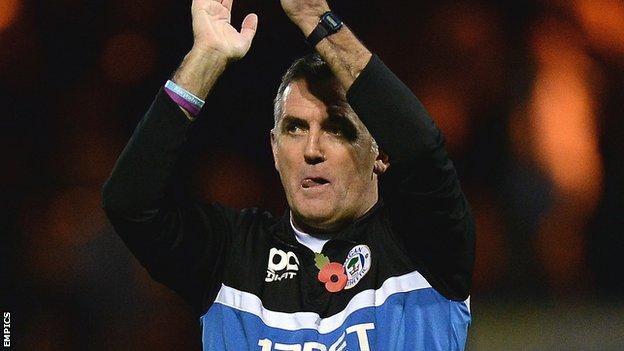 Wigan manager Owen Coyle insists his squad are "up for the challenge" of the congested fixture schedule that awaits after the international break.

The Latics have already played 20 matches this term because of their appearance in the Community Shield and their involvement in the Europa League.

And the FA Cup winners are now set for another busy spell of games.

"When we come out of the international break, we go into 12 games in 39 days," Coyle told BBC Radio Manchester.

Wigan had gone 890 minutes without scoring away from the DW Stadium before Marc-Antoine Fortune's winner at Yeovil on Sunday.

"They [the players] are up for the challenge. I love working with them. We want to keep winning games to move us where we want to be.

"We have a number of international players and they'll go away with their respective countries.

"With the ones left behind, we'll get the balance right between working hard and getting a bit of rest."

Wigan moved back into the Championship's top 10 with a on Sunday, a victory that came less than 72 hours after Coyle's side had played a

Marc-Antoine Fortune's late winner at Huish Park was Wigan's first goal away from home since they won 4-0 at Barnsley on the opening day of the season.

"We create loads of chances and somebody's going to be on the end of three, four or five one of these days," continued Coyle.

"If we had a complaint, it's that we've not been ruthless or clinical in front of goal. If we'd have taken our chances at Yeovil, we would have had five or six goals.

"It's an area we want to get better at and we're still trying to bring another striker in on loan to help us with that burden."