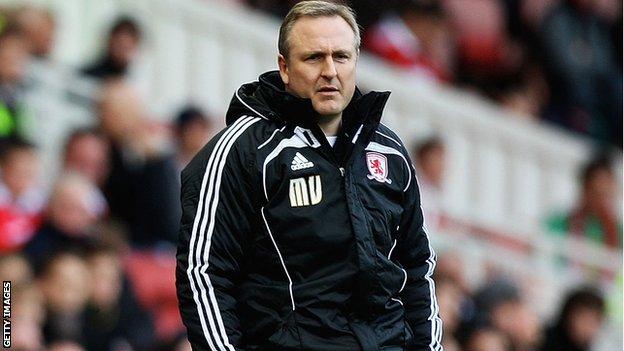 Mark Venus says he wants the Middlesbrough job on a permanent basis.

Venus, 46, took temporary control when and has collected four points from three games in charge.

Against Watford, individual errors cost us. Would a new manager change that? That's really for other people to decide

With Boro not playing until 23 November after the international break, Venus is hoping his future can be sorted out.

He told BBC Tees: "Hopefully these two weeks allow the club to make some plans and if that means them offering me the position then yes I do want it."

Prior to the match against the Hornets, Boro chairman and allowed him to bring in

Tony Mowbray departed as Boro boss with the club 16th in the Championship, 10 points from the play-offs places.

Venus's side remain in the same position, two points closer to the top six.

However, Venus claims any decisions on outgoing transfers are not on his current agenda when pressed about reports linking Lukas Jutkiewicz with a move to Blackburn.

"That's just speculation but, to be honest, I wouldn't know if there was anything happening anyway," he explained.

"It's been the same from the start, I just go into work every day. I'm doing my job and feel like the players are responding to the messages I'm trying to get across.

"Against Watford it was individual errors that cost us and it's for other people to decide whether or not a new manager would change that."