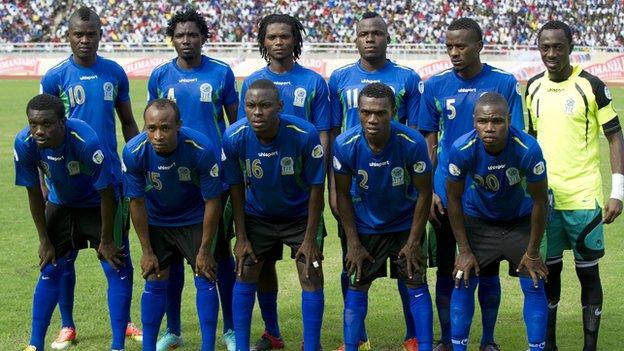 Malinzi was elected in October, replacing Leodegar Tenga, and has already started to stamp his ideas and authority in the federation.

Malinzi is due to appoint his team that will implement his vision of developing football through youth and coaching programmes.

"The past leadership did well in strengthening the administration structures and putting in place good rules and statutes but did little to develop football," Malinzi told BBC Sport.

"I want to focus on football development now," he added.

And perhaps his strategy is the right one when you consider, for example, that the TFF is arguably the richest football association in the eastern Africa region but the national team and the clubs are among the poorest in the region.

The federation has seven sponsors, including Tanzania Breweries who have a sponsorship deal with the national team that is worth with $10 million package over five years.

It means the TFF has enough money to cover its administrative costs and hire staff to implement various programmes. The government also supports the federation by paying national team coaches.

And all these came courtesy of Tenga, whose eight-year reign was characterised by massive turnaround of fortunes for Tanzanian football, which had been in a sorry state before the former international took over in December 2004.

Maladministration had undermined trust in the country's football set-up and when Tenga came in, the football-crazy country thought the messiah had come.

His impact was instant. Apart from the sponsors, stability in the federation also attracted crowds to stadiums and enabled some clubs to get individual corporate sponsors.

But during the handover ceremony, Tenga spoke about transparency, sponsorships and good statutes but had nothing to say about on-the-pitch achievements.

The Taifa Stars are ranked by Fifa outside the top 100 and the sponsored league has failed to produce clubs capable of competing meaningfully at continental level.

Malinzi insists he is starting afresh with new promises.

But tough questions hang over his plans: will he maintain the stability?

Stability is the foundation for any development programme and commentators in the Tanzanian media have greeted his latest moves with mixed reactions. Some say that his decision to eliminate the team that worked under Tenga will create frictions.

It is feared that they will form a group outside the federation which will throw stones for good or bad reasons.

If this happens, it is feared Malinzi may not be able to implement his vision. Problems of the past were created by opposing camps, who fought wars in the media, undermining public confidence in the game.

Malinzi is a wealthy person and his decision to run for the TFF top post was not viewed as an attempt to enrich himself, as it had been the case with the past leaderships.

But his biggest challenge will be to maintain calm in the federation, while working hard to develop football standards in general.