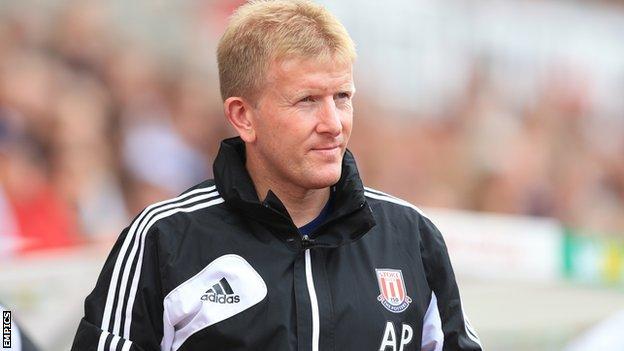 The 42-year-old replaces Dave Hockaday, who left the Conference Premier club by mutual consent last month after a run of seven defeats in eight games.

Pennock's six-year stint with Stoke came to an end in the summer following the departure of boss Tony Pulis.

He will be assisted at the New Lawn by Dave Kevan, currently first-team coach at League Two Cheltenham Town.

"The chairman's ambitions mirrored mine," Pennock told BBC Gloucestershire. "I came out of the interview and thought: 'this is a club I want to be at'.

"I'm going to come in and take every game as it comes and get us to a place I think we should be at."

A former Bournemouth and Gillingham defender, Pennock's only previous managerial experience came at Welling between 2005 and 2007.

"Looking back then I was raw," he continued. "But I had six fantastic years at Stoke, as youth team manager then first-team coach, and the experience I picked up there was invaluable.

"I'm here now and I want to hit the ground running and I can't wait to get going."

Forest Green caretaker manager Scott Bartlett will remain in charge for Tuesday night's game with Nuneaton before returning to his main role as academy boss.