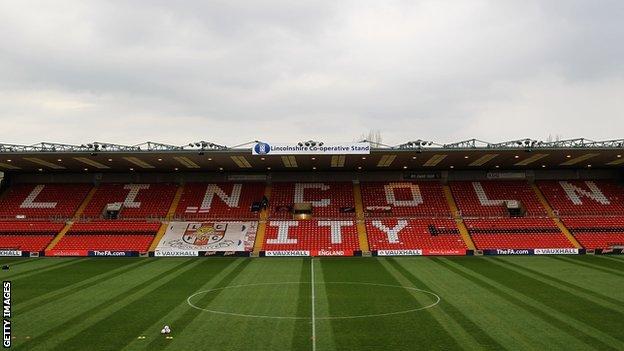 Son of a famous father

He scored in their 2-0 FA Cup final win over Watford in 1984 and set up two goals in their 3-1 1985 European Cup Winners Cup final win against Rapid Vienna.

He also scored once in 12 appearances for Scotland.

The 27-year-old, son of former Everton and Scotland striker Graeme, has scored twice for the Bulls in 2013-14 but has struggled to start games recently.

Sharp, who started his career with Rhyl, signed for the Bulls in January 2013 after a spell with AFC Telford.

He will stay with the Imps until 10 December and will be allowed to play for the club in the FA Trophy.

Sharp spent his formative years with Bangor in the Welsh Premier League, scoring 34 goals in 41 games.

He also played for The New Saints and his time in Wales saw him feature in the Champions League, Europa League and Uefa Cup.

Sharp is set for his Lincoln debut on Tuesday after going straight into the squad for the trip to Southport.

Lincoln, who earned an FA Cup first-round replay with League Two Plymouth Argyle, are currently 13th in the Conference Premier table with 22 points from 17 matches.