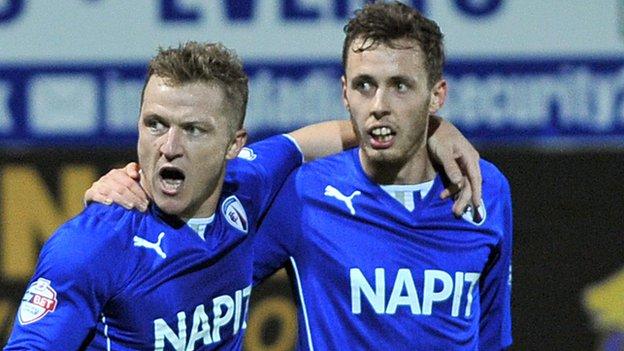 I can't believe we are a third of the way through the campaign already, but it's a good time to take stock of the season so far and assess how the division is panning out.

I think everyone expected Chesterfield to be in and around the top three. They invested in some good players during the summer and made their intentions clear.

Players like Ian Evatt, Gary McSheffrey and Gary Roberts have spent the majority of their careers in higher divisions and will have brought a lot of experience and know-how with their undoubted ability at this level.

They haven't won in seven league games, but with Saturday's FA Cup victory against Daventry fresh in their minds I'm sure they will continue to occupy one of the automatic promotion spots.

Fleetwood have gone quietly about their business and have assembled a really strong squad. They have signed players who know this level really well like Mark Roberts, Ryan Cresswell and Steven Schumacher. All three have experienced promotion from this division and know what it takes.

Keith Hill's Rochdale are always a team that pass the ball well and are a very attractive team to watch. They impressed me when we played them and in Scott Hogan they have a young striker who has all the attributes to go on and have a very good career.

Northampton are a team that have shocked everyone by being at the wrong end of the table so far. To lose in the play-off final after such a long, hard season must be heartbreaking. Inevitably that will have left a hangover going into the new season.

Couple that with injuries to some important players, including their two strikers Clive Platt and Roy Donovan, and it's maybe not surprising things haven't quite gone to plan this time around. I watched them in their FA Cup game against Bishop's Stortford and I fully expect them to pull clear of the relegation zone.

Bristol Rovers are a 'sleeping giant' in our division. They have such a passionate home support and with a new stadium on the horizon, I expect them to start moving up the table and challenging to get promoted in the next year or two.

They have a manager in John Ward who knows this level very well and who seems like a real football man every time I have met him.

We have started the season well and are content with how it's gone so far. We sit in a pack of teams all with high hopes for the rest of the season. Eight points separate the top 16 teams, with them all thinking they are capable of finishing in the top seven.

As I have said before, so many League Two teams are evenly matched and it's about putting runs of results together. When things are going your way make the most of it and get as many points on the board as you can.

Organisation and a high work ethic are imperative if you are going to have a successful season - it was the cornerstone of both promotion sides that I have played in. A good team spirit can see you through tight situations that can often be the difference between one point or three.