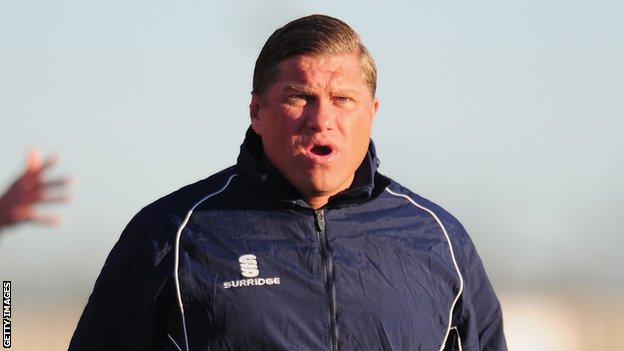 Bishop's Stortford boss Rod Stringer has said only the "right" job would see him leave the Conference South side.

The former Braintree manager led the Blues to the FA Cup first round and joked the run might have "put him in the shop window".

"I've got no reason to get up and walk away," he told BBC Sport.

Despite being a Hertfordshire town just 40 miles north of central London, Bishop's Stortford were forced to play two seasons in the Conference North from 2011 after the demise of Rushden & Diamonds

"But at the end of the day I'm no different to a player. If someone came in and it was right for me then obviously I'd look at it."

Stortford made League Two strugglers Northampton Town work hard for their in front of 2,548 at the ProKit Stadium, around 2,000 more than generally come to a league game.

The Hertfordshire side had despite residing just 17 miles north of the M25, but returned to the southern division this season and are currently third.

"My love and loyalty at the moment is with Bishop's Stortford," said Stringer.

"I wouldn't leave just because somebody has a bigger crowd or fan-base. That's not enough for me.

"This club has got back where it deserves to be, because we've had two years in the North, by no fault of our own.

"Who knows what's around he corner? But I'm Bishop's Stortford manager and I'll be doing everything I can to get us right for next Saturday [in an FA Trophy third qualifying game against Whitehawk]."