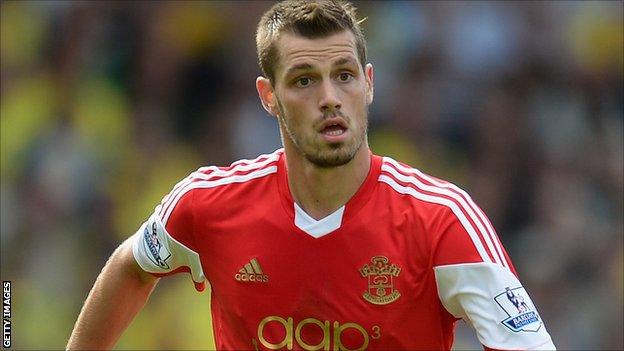 Southampton midfielder Morgan Schneiderlin says he is hoping for a France call-up but is yet to receive any contact from his national team.

The uncapped 24-year-old scored his first goal of the season on Saturday and has been a key player for Saints.

"I have had no contact with France," Schneiderlin told BBC Radio Solent.

"I'm going to keep progressing my performances and if the club can stay in the top five then I can't see why they are not going to see me."

Schneiderlin, who joined Southampton from French side Strasbourg in 2008, has played at every level from Under-16 to Under-21 for his country.

Last season he was crowned fans' and players' player of the year and has continued to impress this term, as Saints have climbed to third, leaving Saints manager Mauricio Pochettino baffled by his international exclusion.

"It does surprise me because he's a player that does have the same quality as the players that have been called up," said the Argentine, who warned the player would soon be able to qualify for the England.

"He is a player that has amazing quality and I am 100% sure it will happen.

"He needs to keep on working with the same humility, the same work ethic and it's a matter of time until he will get that call up.

"The only thing I would say to the French Federation is they should be careful because he might be able to play for England."

His team-mates Rickie Lambert, Jay Rodriguez and Adam Lallana will all link up with the England squad on Tuesday and Schneiderlin says the trio deserve their recognition.

"I was so glad for them, they deserve that so much," he added.

"For Rickie it is normal to be called up but for Jay it is amazing because he's worked very hard and has great ability.

"For Adam, well he is one of the best players I have played with in my life. He is just amazing and this season he truly deserves his call up. He is full of confidence and is a pleasure to play with."