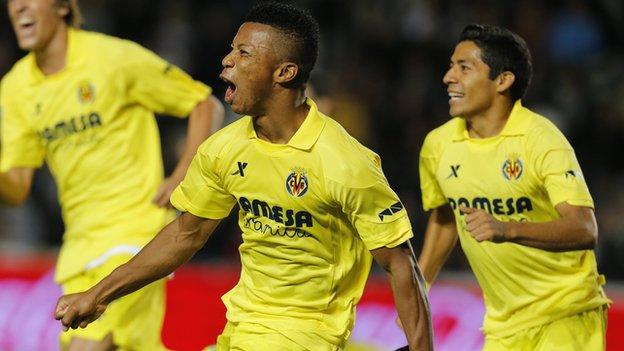 In-form Villarreal striker Ikechukwu Uche says he is not concerned by his continued omission from Stephen Keshi's Nigeria squad.

He is not part of Keshi's plans for the second leg of their World Cup play-off against Ethiopia despite three goals in his last four matches in Spain.

"Sometimes it [snub] crosses my mind but I remain a fan of the Super Eagles."

"If I get another chance I'll honour the call," he told BBC Sport.

I'm feeling good, fit and motivated and as long as I keep performing I will keep pushing my name up the list

Nigeria hold a 2-1 lead from the first leg of the World Cup play-off ahead of Saturday's second leg in Calabar.

Bright Dike, who plays for Toronto FC in the MLS, has been called up by Nigeria as replacement for Uche Nwofor ahead of the match.

Injured Nosa Igiebor has pulled out of the tie as well as the friendly against Italy in London on 18 November.

"Since I'm not in the squad I can only wish the team well.

"I'm very happy with my form, fitness and encouraging performance at club level."

Uche's last appearance for the Super Eagles was in the final of the 2013 African Cup of Nations against Burkina Faso in February.

Despite emerging as top scorer during the tournament's qualifiers with three goals, he failed to shine in South Africa and has since been overlooked by the selector.

He has slipped behind Emmanuel Emenike, Brown Ideye and Shola Ameobi in Keshi's plans over the last ten months.

But he insists an international snub has not dampened his spirit and optimism.

"I've played almost every game for Villarreal this season and proved I can perform at the highest level," he continued.

"I'm feeling good, fit and motivated and as long as I keep performing I will keep pushing my name up the list."

One of his nation's all-time top ten scorers Uche knows the past count for nothing.

"You can only look back and feel proud of your achievement with the national team and nothing more," he insisted

"Right now it's a development squad [the Super Eagles], which means it's something for the future with guys that are going to be playing for Nigeria in years to come.

"I'm basically working very hard with my club and will let the future take care of itself."