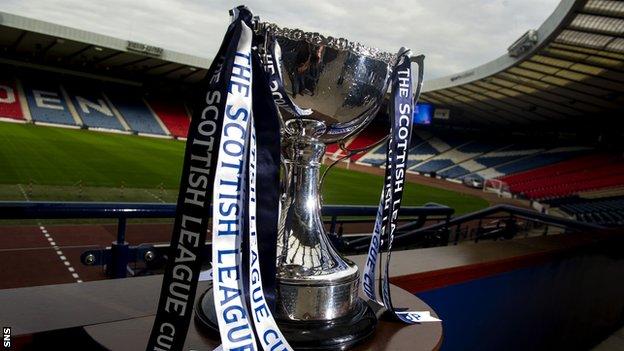 Hearts' Tynecastle Stadium and Hibernian's Easter Road ground have been confirmed as the venues for the Scottish League Cup semi-finals.

Hearts v Inverness Caledonian Thistle will be staged at Easter Road on Sunday 2 February, kicking off at 12:15 GMT, and will be televised by BBC Scotland.

There will also be live BBC Radio Scotland coverage of both games.

Inverness lost on penalties to Hearts at Easter Road in last season's semi-final, with Gary Locke's side going on to lose the final against St Mirren.

And the Highlanders are disappointed to be returning to the same venue for an early kick-off.

"It is unfair to ask our supporters to go down the A9 in darkness to get to Edinburgh in time for a 12.15 kick off," said chairman Kenny Cameron.

"The directors share the fans' concern and we made verbal and written representations to at least have a later kick-off. But it appears this was not possible.

"We intend having a further discussion with the Supporters Trust to see if the club can help in any way with the travel arrangements for our fans.

"We suggested alternative venues of McDiarmid Park, Pittodrie or Tannadice."

A venue for this season's final on Sunday 16 March is yet to be confirmed, with Hampden Park unavailable due to redevelopment work taking place to lay track for the 2014 Commonwealth Games in Glasgow.

Easter Road will also host the Ramsdens Cup final between Raith Rovers and Rangers in April.

Both Scottish Cup semi-finals will take place at Rangers' Ibrox Stadium and Celtic Park is the venue for the final of that tournament.