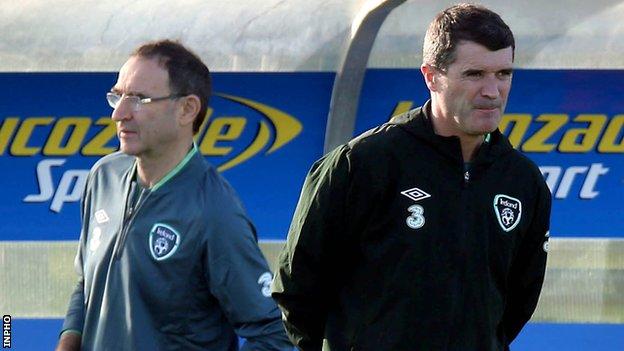 New assistant boss Roy Keane was the first to arrive at Republic of Ireland training in Malahide on Tuesday as preparations for Friday's friendly against Latvia got under way.

Keane, 42, turned up 90 minutes before Martin O'Neill and his players were scheduled to begin work at Gannon Park.

The Cork man checked out the training pitch before inspecting the nearby gym facilities at the north Dublin venue.

Keane returned to the training pitch well before the first players arrived.

The former Republic of Ireland and Manchester United captain, who was wearing full training kit, had time to sign autographs and pose for photographs with fans who had turned out to witness the start of the new regime.

Striker Robbie Keane expressed mock surprise at the size of the media pack which had assembled well in advance of the scheduled start amid a relaxed atmosphere.

O'Neill and the remainder of the squad arrived within minutes on the team coach and he and his assistant boss looked on as the players warmed up, with keepers David Forde, Keiren Westwood and Rob Elliot working with with new goalkeeping coach Seamus McDonagh.

Manager O'Neill, who was formally unveiled at a news conference in Dublin on Saturday, was scheduled to speak to the media once again on Tuesday afternoon with Keane scheduled to hold his first conference on Wednesday.

Speaking on Tuesday afternoon, O'Neill joked that he had "sent" Keane to training early before admitting:"I did not, he wanted to go.

"He was with the goalkeeping coach and Seamus (McDonagh) is always early," said Keane.

"Seamus would have started at 5.30am this morning if he could, so Roy wanted to go with him just to get a few things organised.

"He was very focused, he was looking forward to it and he was talking a great deal about it last night, and true to his word, he was there."

O'Neill and Keane held their first meeting with the Republic players on Monday evening and the manager spoke of an "enthusiastic" squad despite their failure to qualify for the World Cup finals.

"Just speaking to them last night, I think they felt that probably the killer-blow was really the late equaliser by Austria.

"That certainly knocked confidence a bit, and from then onwards, it was really uphill. But overall, they are looking forward to it."

Asked about the prospects of Stephen Ireland ending his international exile, O'Neill reiterated that he has an open mind on the issue.

The Cork man has not played for his country since he lied about the death of both of his grandmothers after pulling out an Irish squad in 2007 but he has indicated that he will consider making himself available again.