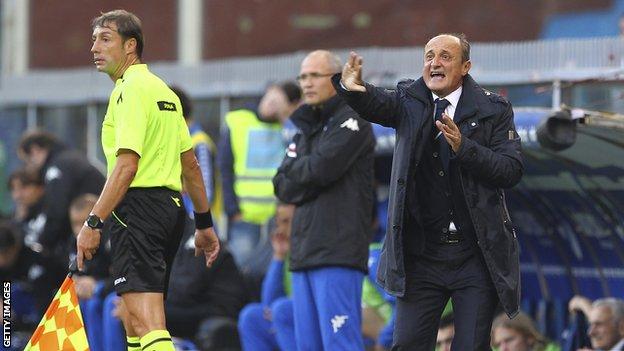 Serie A strugglers Sampdoria and Chievo have reacted to their poor starts to the season by sacking their coaches.

Giuseppe Sannino departed bottom-placed Chievo after a 12-game spell in charge in which his club gained six points. He has been replaced by former boss Eugenio Corini.

Sampdoria confirmed they had ended Delio Rossi's 11-month tenure following a 2-1 loss at Fiorentina on Sunday which left them in 18th place.

Their dismissals meant that five head coaches have lost their jobs this season in the Italian top flight.

Another manager under pressure is AC Milan head coach Massimiliano Allegri but on Sunday vice-president Adriano Gallian insisted the club plan to keep faith with the ex-Cagliari boss.

The Rossoneri's 0-0 draw with Chievo on Sunday means they have not won in all competitions since 19 October.

"I just talked to [club president Silvio] Berlusconi. We'll go forward with Allegri," Galliani said. "We will look at the positive things."

Milan's sixth match without a win left them 10th in the table on 13 points - 19 behind Serie A leaders Roma.