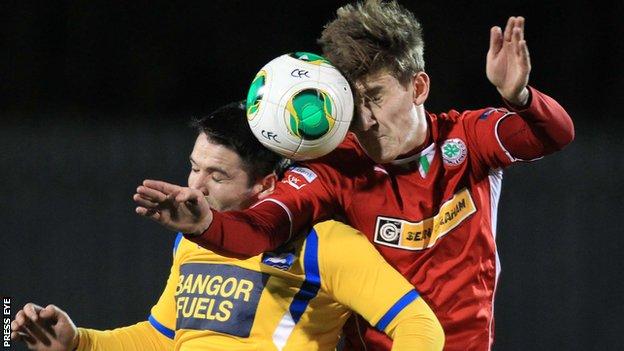 Holders Cliftonville booked their place in the semi-finals of the League Cup with a comfortable 4-0 win over Bangor.

The Reds took the lead in the seventh minute when Martin Donnelly's free-kick was headed in by Bangor's Barry Walsh for an own goal.

Liam Boyce netted a simple tap-in nine minutes before the break after the Bangor defence failed to deal with Jamie McGovern's ball from the right.

Joe Gormley scored twice in the second half to wrap up the victory.

Boyce set up strike partner Gormley to round keeper Paul Cairnduff for the third in the 72nd minute.

Bangor, the only non-Premiership side to make the last eight, were confined to a few half-chances on the counterattack.

In the first half Dominic Melly's low drive from distance forced Cliftonville keeper into a save at the expense of a corner.

At the other end, keeper Cairnduff twice saved with his legs to keep out Stephen Garrett efforts.