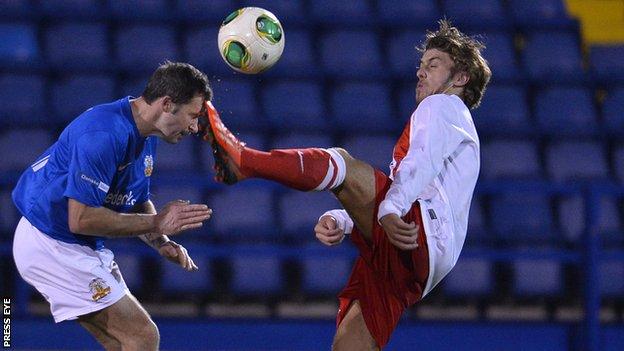 Ards lost a 3-0 lead against Glenavon but eventually went through 5-4 in a League Cup penalty shoot-out.

Ards netted three goals in the first half, the first two by Willie Faulkner with the third coming from Ben Roy.

Glenavon staged a great fight back after the interval with defender Rhys Marshall scoring two headers with Mark Patton also on target.

Ards had David Gibson sent-off late on for a second yellow card but they went through to the last four on penalties.

Penalties had looked unlikely as Ards, against the odds, stormed into a 3-0 lead inside the first 26 minutes.

Craig McMillen sent Faulkner through to shoot past home keeper Andy Coleman in the 19th minute.

Just three minutes later Faulkner struck again from the edge of the box after McMillen's ball had come off Gareth McKeown.

Faulkner then turned provider for former Dundela danger man Roy to make it 3-0 with a low shot across keeper Coleman.

Glenavon player-manager Gary Hamilton brought himself on a half-time and it was from his corner that Marshall headed in at the back post on 57 minutes.

Patton then pounced to make it 3-2 on 77 minutes and Marshall leapt to head in from another former four minutes from the end to force extra-time.

In the shoot-out Guy Bates and McKeown saw their efforts saved by Ards keeper Graeme McKibben while Glenavon's Coleman saved from Scott Davidson and Stevie Gordon.

The tie was eventually decided when Ciaran Martyn's spot-kick hit the bar and Ryan Henderson netted the winning penalty for Ards.