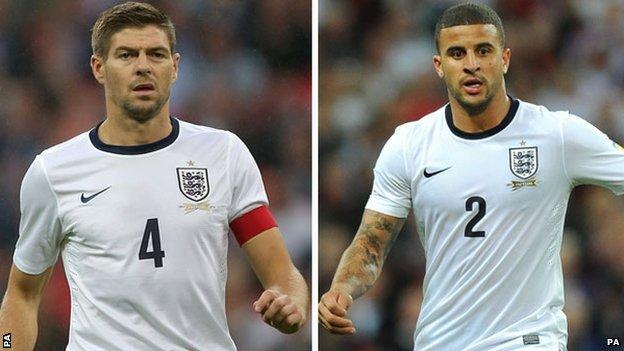 Captain Steven Gerrard and defender Kyle Walker will miss England's friendly against Chile at Wembley on Friday because of minor injuries.

But Chelsea midfielder Frank Lampard, who had been feeling unwell, trained with his international team-mates.

Michael Carrick, 32, and Danny Welbeck have already withdrawn from the squad.

The Manchester United duo have Achilles and knee injuries respectively and will also miss the friendly against Germany on Tuesday.

Welbeck, 22, who has scored eight goals in 20 appearances for his country, was named in the squad despite not having played since 19 October.

The absence of Gerrard and Carrick, combined with Arsenal midfielder Jack Wilshere's continuing recovery from an ankle injury, increases the chances of a debut for Southampton's Adam Lallana.

Gerrard had hoped to be fit for the Chile match, describing the injury as "a bit of a niggle" after being withdrawn 66 minutes into Liverpool's 4-0 defeat of Fulham on Saturday.

Walker, who played the full 90 minutes as Spurs lost 1-0 to Newcastle on Sunday, is struggling with an unspecified injury and, along with Gerrard and striker Daniel Sturridge, the 23-year-old went through a recovery session away from the rest of the England squad on Wednesday.

But Liverpool's Sturridge, who has been nursing a foot injury, could still feature against Chile.

England's preparations for the two friendlies had already been disrupted by the need to switch bases after a stomach bug alert at the site of the National Football Centre.

The senior side met up in Watford on Tuesday, rather than their usual home in Staffordshire, as a precautionary measure.

Barcelona's Sanchez, who had a tough upbringing, told the Daily Express that England players were "soft" because of their pampered lifestyles.

Lambert said: "You can't really buy motivation like that to be honest."