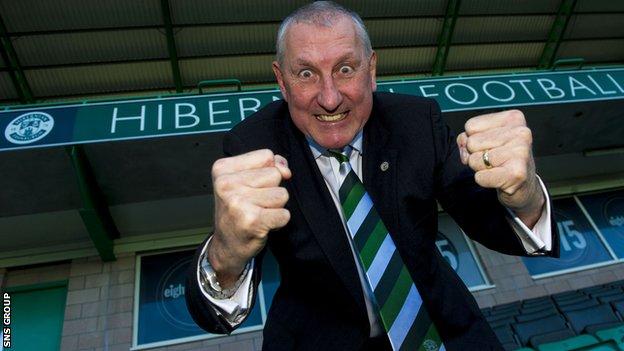 New manager Terry Butcher aims to get his Hibernian players performing like the Inverness Caledonian Thistle team he has left behind.

Butcher, 54, looked on from the stand on Saturday as his former charges eased to a 2-0 win at Easter Road.

And he and his assistant Maurice Malpas completed the switch after compensation was agreed on Monday.

"If you look at the way Caley Thistle played on Saturday, that's the way we want to get Hibs playing," he said.

Butcher joined Caley Thistle in January 2009 and leaves the Highlanders sitting second in the Premiership and in the semi-finals of the League Cup.

If everyone at Hibs works harder, then we can make this a really big club that everybody's proud of

"It's been a whirlwind seven or eight days and we're just delighted to be here," he explained.

"It's been a difficult week because of what we have left behind up there - we have left some fabulous players and it's hard to say goodbye to that.

"It's been nearly five years up there and we really enjoyed our time."

Butcher and Malpas are inheriting the lowest scoring league side in Scotland and the pair will be joined by their chief scout Steve Marsella for the challenge ahead.

"I'm excited about the future and what we can achieve at Hibernian," added Butcher.

"It was great to meet the players at the training centre and there were a few meaty tackles flying in; everyone was trying to impress."

Butcher succeeds Pat Fenlon and is the Edinburgh club's 10th manager in 16 years.

"It can be a difficult job picking a manager but it's made easier when there is one outstanding candidate," said chairman Rod Petrie.

"Terry is vastly experienced in Scottish football and an outstanding leader of men.

"He inherits a talented squad of players and we believe he has got the managerial skills and motivational qualities required to develop them as players and as a team and move the club forward."

He added: "When you look at what Hibs have got to offer, the blocks are in place. The only thing that is missing is the team and that's our job, that's what we do well.

"When I looked at the Caley Thistle side on Saturday, I felt proud.

"It was good for me to watch the game because I could see things in Hibs that need to be improved.

"If everyone at Hibs works harder, then we can make this a really big club that everybody's proud of."

Malpas, 51, was offered the manager's post at Inverness CT but declined the opportunity to replace Butcher at the helm, as he did at Motherwell in 2006.

"Obviously, I thought about it but myself and Terry went to Inverness as a partnership and we always said we would leave as a partnership," said the former Scotland defender.

"It was a simple decision really. I wanted to be at a bigger club and that is no disrespect to Inverness.

"The training facilities, the stadium, the fan base and the potential was just too much for me to say no to,

"I'm desperate to do well and improve as a coach and I think I have that opportunity here."