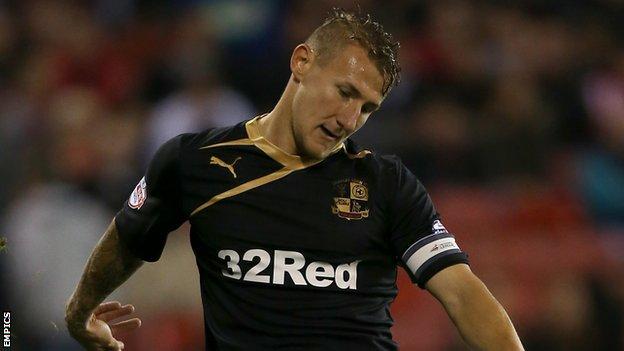 Crawley Town defender Kyle McFadzean aims to move on from the mistake which led to the opening goal in his side's 2-0 defeat by Bristol City.

The 26-year-old was left out of the starting XI for Saturday's FA Cup first-round win at Hednesford.

"I don't like it but things happen and I want to bounce back stronger. Hopefully I will," he told BBC Sussex.

"The manger [Richie Barker] had a word with me and said he didn't think it was right for me to play that match."

Robins striker Jay Emmanuel-Thomas capitalised on a slip from McFadzean to open the scoring in the 80th minute, as Crawley fell to their fourth-straight league defeat last Tuesday.

You have got to be a bit patient. As a footballer, you don't get much time. In pre-season I was way behind everybody

The former Alfreton Town defender had given away a penalty in their 1-0 defeat to Brentford three days before.

After the defeat to Bristol City, Reds left-back Mat Sadler bemoaned "a catalogue of defensive errors" in recent games, while manager Barker questioned the decision-making of his players.

"The gaffer said have a look back at my performances," McFadzean added. "If it [the game] was 80 minutes we wouldn't be talking about it.

"Defenders make a mistake and you get punished. Strikers get away with it if they miss a chance."

McFadzean missed the majority of last season with a serious virus and says he his preparation for the campaign in pre-season was far from ideal.

"I was out a long time and it takes a bit to get back to where I was," the centre-back said.

"You have got to be a bit patient. As a footballer, you don't get much time.

"In pre-season I was way behind everybody. Fitness-wise, I was way off where everybody else was,

Crawley's run of defeats in League One has seen them drop to 13th in the table, but McFadzean believes the FA Cup win at Hednesford will give them a boost ahead of the trip to Carlisle this weekend.

"We needed a win after four bad results," he said.

"We scraped it and it was a hard result but we put in a professional performance.

"I think we are confident. We have just been unlucky. If you take out my mistakes out, we have not been far away.

"We have played worse this season and got results. It is just little things. If we stop them I am sure we will start winning again."