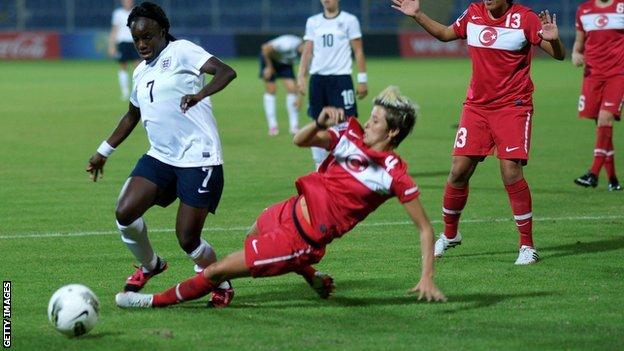 There are some who still cling to the outdated belief that football is a man's world, run by men and played by men for the enjoyment of other men.

Attitudes are changing, however, and barriers are slowly being broken down. On a cold November day in Manchester, some of the game's most influential females are proving that, in future, the game may be nothing without women.

Beyond the windows is the damp murk of Lancashire, but inside a well-lit room overlooking the pitch at Manchester City's Etihad Stadium, leading names from England's biggest clubs, agents, renowned broadcasters and esteemed coaches are here to discuss the game.

All of them are women.

"We are moving in the right direction," England women's captain Casey Stoney tells BBC Sport. "But there is still a long way to go.

"We need to aim to get to a point where the culture is that women are accepted in football, so that it becomes normal for people to see women in some of the most powerful jobs in the game.

"If there are more women at the top, then that will filter down to the rest of the game and open doors."

Stoney is one of dozens of women who are here for a mentoring day aimed at women seeking a career in football. Stoney has played for England 116 times but is thinking about her life after football and whether she can carve out a career in an industry that remains male-dominated.

Hannah Harding is a young journalist, wanting to break into football broadcasting. She is here to speak with female radio producers, broadcasters and leading journalists as she attempts to navigate her way into the industry.

"Football is male dominated and can feel quite intimidating," she says. "But everyone here seems quite hopeful, they are talking about change.

"They are saying 'this is growing, that is expanding' - I still don't think that football is opening up to women in the mainstream way it is to men. But there are ways to get around the more direct route. I hope today will help."

Hannah's views are shared by many in attendance. Despite obvious progress in the past decade, many young women still see football as a closed shop, an intimidating world, a sporting frontier that is out of reach and will stay that way.

But those preconceptions are being challenged. The under-representation of women in football remains a major issue but now there are examples for others to follow.

Karren Brady and Margaret Byrne are running West Ham United and Sunderland respectively, while Vicky Kloss is a director at Manchester City. The Football Association is also changing, having appointed Heather Rabbatts as its first female board member in 2011 and made Kelly Simmons director of the national game some 12 months ago.

But the concern is that these women remain the exception rather than the rule.

Kick It Out decided to hold this event after only nine per cent of those attending a similar mentoring event in 2012 were female. Their decision to specifically target women resulted in an immediate sell-out.

One of the mentors at the Etihad is Georgina Lillis, a football agent. She spends the day giving young women advice on how to follow in her footsteps.

Does she think attitudes are changing?

"Kick It Out is renowned for its anti-racism work but its remit is to stamp out any form of discrimination. The organisation recognised women were under-represented in the football industry and felt it needed to step in and actively help those pursuing a career because more diversity is needed. It was the first time a women-only football mentoring event had been held and the aim was to show that there are women making their way in the game - whether it be playing, coaching, medical, administration, or in the media. By sharing our collective experiences and offering practical advice it was a very positive and empowering experience for all those involved at the Etihad."

"There have been times when I have spoken to managers and they have said they weren't comfortable talking to a girl about football," she says. "I think they just thought I was someone's PA, or there to make cups of tea or coffee.

"Another man asked me if I wanted him to explain a teamsheet to me at a football game. A scout had to take me away to take a few deep breaths.

"When I go to games I always get asked 'which one is your boyfriend?' It has been hard to get people to take me seriously. But when they see me at six games a week, they begin to think that I might know a bit."

One theme that crops up in a number of conversations during the day is a possible quota that would see women better represented in positions of power within football.

But that is something Rita Purewal, chief finance officer at Wolverhampton Wanderers, believes is a step too far.

"Women don't need to be forced into these positions," she says. "I believe there are a number of very good, high calibre women out there that can get into those positions on their own merit.

"I would hate to think that would be judged if that had got there purely because of a quota. What we need to do is ask why women aren't getting in those positions and ask what are the reasons for that.

"Are there enough women getting through to the interview process? Are women fairly represented on the selection panel? Those are the things we need to look at, rather than a hard and fast rule."

It is clear that this is not a battle that will be won overnight. But there is a tangible sense of optimism as the event draws to a close at the Etihad.

Roisin Wood, director of Kick It Out, shares it. "Today has been about trying to get more women into football, to try and get more diversity into the game in this country," she says.

"We want to empower women so make sure they are on an equal footing with men when they go for jobs.

"We need to see more diversity in the boardroom and in positions of influence. I often go to football meetings and find I am the only woman in the room. But that will change."

For many years, football has been a closed door for women. But having got a foot in the door, the push is on to open the way for others to follow.