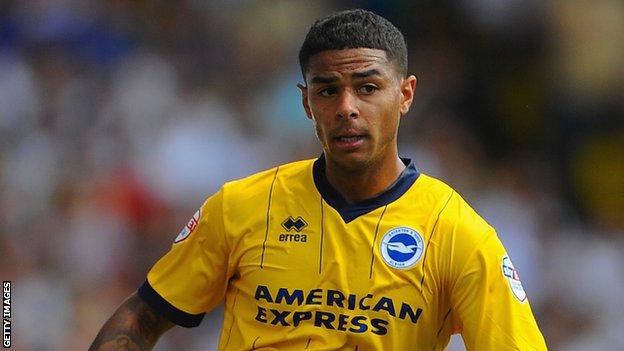 Brighton midfielder Liam Bridcutt says he was thrilled to make his comeback after a three-month injury lay-off.

The 24-year-old Scotland international returned as a substitute in last weekend's 3-0 win over Blackburn.

"I have been out a while and I've been dying to get back," he told BBC Sussex.

"It is one of those injuries where you have to let it settle and get it right. I've done that and there is no better feeling than having the crowd cheer your name."

He added: "I have been working hard in my rehab and feel quite fit.

Liam Bridcutt says Brighton strikers Craig Mackail-Smith and Will Hoskins, who are sidelined with long-term ankle and knee injures respectively, helped him during his time out with injury.

"You have got to look at Craig and Will, who have had major injuries," Bridcutt told BBC Sussex.

"You see them coming in every day and smiling and getting on with things.

"That helped me massively as what I have been through is nothing compared to what they have had.

"I take my hat off to them. All you want to do as a player is be out there."

"When you come off the bench it is hard to adapt to the speed of the game but I felt good.

"I have missed a lot of matches and you can't get any better than a match day. I'll try and get my fitness levels up in before the Wigan game."

Bridcutt was forced onto the sidelines at the start of the season with a hernia and was kept out as he dealt with a pubic bone problem.

"I had an ongoing issue last season with pubic symphysis," he said.

"I got that settled in the summer but then developed a hernia. That had a knock-on effect that then I needed surgery.

"By having the surgery I couldn't keep up my programme to stop my pubis flaring up. It was a domino effect of a few things and I needed to get them right.

"For a month I wasn't allowed to do anything so I was just sitting at home.

"It is tough being on the sidelines when the boys are out there training."

Defensive midfielder Bridcutt, who has won one cap for Scotland, is one of a number of players Brighton & Hove Albion have had to cope without because of injury.

Midfielder Andrea Orlandi, winger and Kazenga LuaLua and strikers Leonardo Ulloa, Craig Mackail-Smith and Will Hoskins are are currently sidelined.

"Liam is a big player for the club and it is nice to see him back," Seagulls defender Matthew Upson told BBC Sussex.

"He has got a couple of weeks to sharpen himself up and maybe get more match practice.

"We can only get better as players come back into the team gradually, start to get fit and filter back into the group. It looks good going forwards in that way."