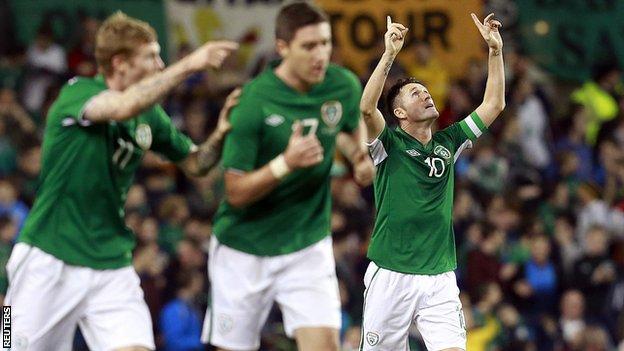 Martin O'Neill's reign as Republic of Ireland boss got off to an impressive start with a convincing victory over Latvia in Dublin.

Robbie Keane prodded in after James McClean had flicked on Aiden McGeady's corner midway through the first half.

McGeady fired in the second goal in the 68th minute, beating keeper Andris Vanins with a low drive from distance, while Shane Long grabbed a late third.

It meant a satisfying beginning for O'Neill and his assistant Roy Keane.

The Republic dominated the game with Latvia creating few opportunities.

O'Neill and Keane now take their squad to Poland for a friendly on Tuesday night and they are expected to make a number of changes as they assess the resources at their disposal.

They will be buoyed by the warm reception they received from the crowd in Dublin, with the attendance swelled by the great interest sparked by the managerial appointment.

The fans got their money's worth in what turned out to be a comfortable victory over a Latvian side without an away victory for two years. The Republic played most of their football along the ground, a marked difference to some of the performances that led to Giovanni Trapattoni leaving his role as head coach.

Former Northern Ireland skipper O'Neill and 67-times capped Republic midfielder Keane were in constant discussion on the touchline, with O'Neill advancing regularly to the technical area to offer encouragement to the Irish players.

LA Galaxy striker Keane has now scored 62 goals in 131 appearances for the Republic after he netted from close-range in the 22nd minute.

Keane had earlier shot straight at keeper Vanins from close-range and forced another save two minutes after his goal as Ireland dominated the first half.

McClean, who played under O'Neill at Sunderland, produced a bright display to be named man of the match, but wasted a chance to score when he pulled a right-foot effort wide of the near post.

The Republic should really have added to their tally before McGeady, teaming up again with his former Celtic boss O'Neill, finally made it 2-0.

McGeady picked up a loose pass from Juris Laizans in the Latvian defence and the low shot from about 25 yards beat the keeper inside his right post.

There was little doubt now that the managerial double act of O'Neill and Keane would enjoy a winning start and substitute Long made it 3-0 in the 79th minute, tapping in from close range following Seamus Coleman's cross.