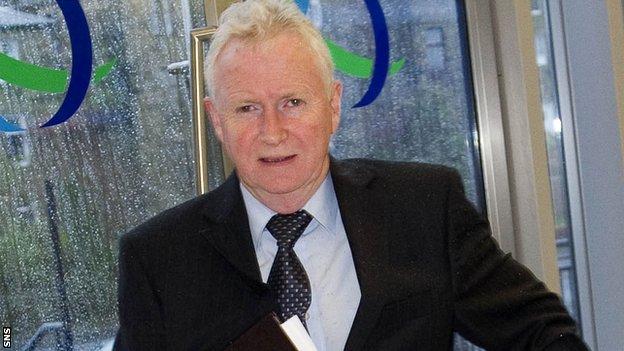 Inverness have criticised the decision to play their League Cup semi-final with Hearts in Edinburgh.

"It is unfair to ask our supporters to go down the A9 in darkness in February for [that] kick-off," said chairman Kenny Cameron.

"The SPFL have informed us of their decision and, deeply disappointed as we are, we have to accept it."

Inverness were unhappy at playing Hearts at the same venue last season but the repeat journey has been exacerbated by limited public transport options.

The match is also being shown live on BBC Scotland.

Inverness said they had attempted to persuade the Scottish Professional Football League to change the kick-off time and location.

"The directors share the fans' concern and we made verbal and written representations to at least have a later kick-off. But it appears this was not possible," said Cameron.

"We intend having a further discussion with the Supporters Trust to see if the club can help in any way with the travel arrangements for our fans.

"We suggested alternative venues of McDiarmid Park, Pittodrie or Tannadice rather than making our fans travel to Edinburgh."

Davie Balfour, chair of fans' group Caley Jags Together, added: "Following my discussion with the chairman last week we were in unison in our views as to where the semi-final should be played and a trip back to Edinburgh was not on our radar.

"I am alarmed at the prospect of our supporters having to set off in the early morning on a road that is notoriously icy and prone to snow at that time of year.

"Irrespective of distances involved, as we are used to travelling, we feel that safety considerations should be paramount."