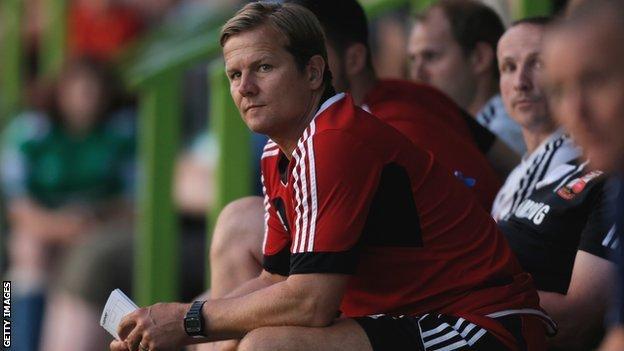 Swindon Town's progress in the Johnstone's Paint Trophy has "eased the pain" of their FA Cup exit, according to manager Mark Cooper.

The Robins beat Wycombe 2-1 on Tuesday to reach the southern area semi-finals of the Football League trophy.

Their victory came after Saturday's shock 4-0 defeat at non-league Macclesfield in the FA Cup first round.

"We haven't put Saturday's game in the back of our minds, but we've certainly eased the pain," he told BBC Wiltshire.

"It was important to get a reaction. The players showed they cared."

The hosts found themselves a goal behind after Matt McClure's strike, but a brace from Nicky Ajose kept them in the competition.

"All I asked for was desire," said Cooper. "We know we can play football but the questionable thing is the desire. That's what I wrote on the board tonight and we got it."

Cooper described the defeat at Macclesfield as the worst of his career and it has since been confirmed that the players and staff at Swindon will refund the travelling fans the cost of their match tickets.

Hiowever, the result on Tuesday means the Robins have now won five of their last six home games, and they will face either Peterborough, Newport or Stevenage in the trophy semi-finals.

"I thought we played quite well," added Cooper.

"The longer it went on, and the more Wycombe tired, we always looked like we were going to score. I thought if we got one we could always get another one and that's how it panned out."