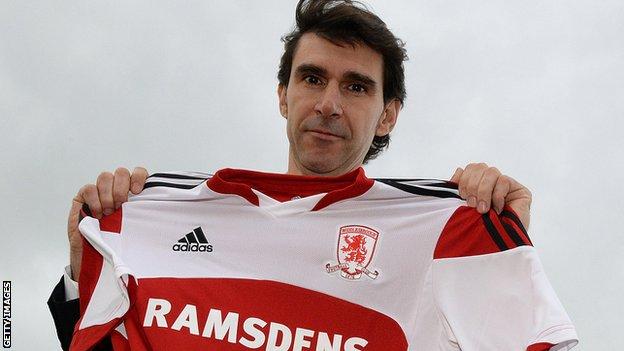 Middlesbrough have named former Real Madrid assistant manager Aitor Karanka as their new head coach on a contract until 2016.

Karanka, 40, worked under Jose Mourinho for three years at the Bernabeu, but has no previous managerial experience.

The former Real and Spain defender left the nine-time European champions when Carlo Ancelotti replaced Mourinho as Madrid manager in the summer.

Who is Aitor Karanka?

"This is a very important day for me and I'm delighted to join a club with such big facilities and support," Karanka told BBC Tees.

"It is my time, I know I am ready. I've worked for three years with Jose and he was supporting me every day and I learned so much.

"I spoke to him and he recommended me to come here - he too believes in this project."

Former manager Tony Mowbray and since then his deputy Mark Venus has been in temporary charge.

Middlesbrough are currently 16th in the Championship table, eight points adrift of the play-off positions and five points above the bottom three.

Gareth Southgate took over at the Riverside and three years later Boro were relegated to the Championship.

Southgate left the club in October 2009 and both Gordon Strachan and Tony Mowbray have since come and gone having failed to secure a play-off place.

"There are no easy answers and I think I could've been accused of being 'a little Englander' with my previous appointments," explained chairman Steve Gibson.

"There were 100 applications and it was about finding a first-class coach, regardless of nationality, and I believe we have.

"Football is a global business now and we must move with it."