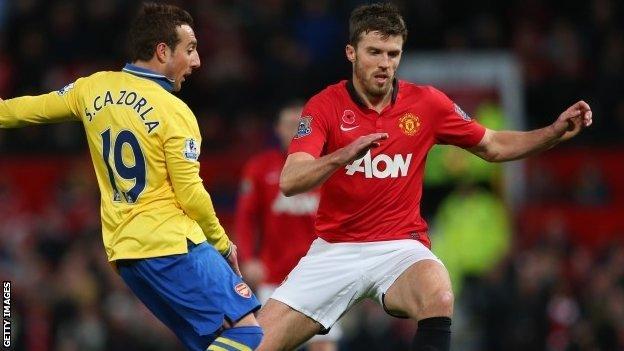 Manchester United and England midfielder Michael Carrick will be out of action for four to six weeks with an Achilles tendon injury.

The 32-year-old, who played the full 90 minutes in the 1-0 win over Arsenal on Sunday, withdrew from the England squad to play Chile and Germany on Tuesday.

A six-week lay-off would keep Carrick out until after Christmas, missing six league games.

Carrick missed the 3-1 win over Fulham on 2 November with an Achilles problem.

Apart from that game, the former Tottenham and West Ham player has not missed a minute of the defending champions' Premier League campaign to date.

Carrick will miss the visit to Spurs on 1 December, and could still be out of action when United visit his other former club West Ham on 21 December.

His side also face Cardiff, Everton, Newcastle and Aston Villa in the next six weeks, as well as having two Champions League group games and a Capital One Cup quarter-final at Stoke.

Belgium international Marouane Fellaini, signed from Everton for £27.5m in September, may also come into consideration.

The 25-year-old has said he prefers a more defensive midfield role to the playmaker position he filled at Goodison Park.