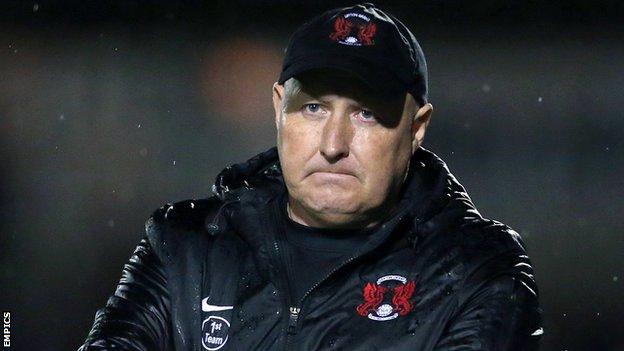 Leyton Orient manager Russell Slade says his side must use their exit from the Johnstone's Paint Trophy to spur them on in League One.

The O's, who were knocked out by Stevenage on Tuesday, are currently two points clear at the top of the table.

Slade told BBC London 94.9: "We have been knocked down and we have to learn from it.

"We are only going to be successful if we taste failure. We have tasted it and we don't like it."

It is always difficult when the opposition are defending so deep. But we ran out of ideas a little bit

"We want to get back to winning ways."

Orient found themselves 3-1 down after just 16 minutes of their southern section quarter-final against Stevenage and Slade feels his side were left with too much to do.

"I'm very disappointed about the goals," he said. "It was three crosses and three goals. We managed to get a goal back in between but it left us a real mountain to climb.

"Getting one before half-time to make it 3-2 gave us a real chance. In the second period, with them down to 10 men, it was one way traffic.

"It is always difficult when the opposition are defending so deep. But we ran out of ideas a little bit.

"Maybe on another day we could have got one."

Orient, who have lost just once in the league this season, return to action when they welcome Preston North End on Saturday.