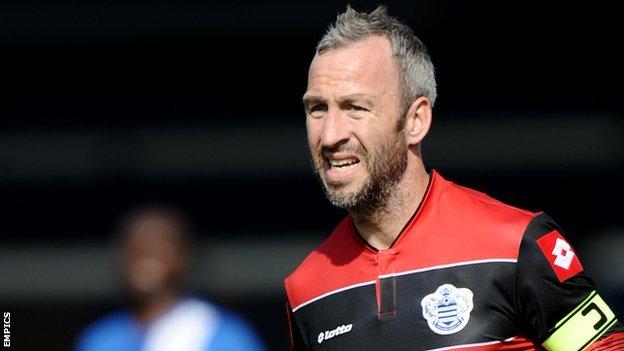 Notts County manager Shaun Derry says his players must prove they have the spirit and quality to keep the beleaguered club in League One.

The Magpies are bottom of the table and have gone out of two cups in two games since Derry was named player-boss.

"We are at a crossroads. I know which direction I am going in. And it's up to the players if they want to come with us," Derry told BBC Radio Nottingham.

"I've got to apologise for all those fans who made the long trip to Oldham. I felt for them.

In times of adversity, this is where the men stand up and I am asking them all to look at themselves.

"I'm speechless with what I have seen. I have said to the boys, 'you either come with me or you don't'. That's where it is at the minute."

Derry, 35, began his playing career at Notts and was clearly hurting after seeing his side squander a 1-0 lead against the Latics.

"I have seen things in training that I have not seen in the game," he added.

"I will back them 100% but I can't tonight. That performance was not acceptable. That's not in my make-up and I don't want to it to be in theirs either.

"In times of adversity, this is where the men stand up and I am asking them all to look at themselves.

"After Saturday [a 3-2 defeat against Hartlepool] I saw a lot of positives, but they have to look at themselves. They have to ask, are they being the best professional they can be?

"It's all well and good doing it in training, but I want them to produce on a Saturday.

"Of course I am new to the game and this will probably be my most valuable learning experience.

"I will take something from this because I will make sure it doesn't happen again. I am looking for a reaction from them and let's see what happens on Saturday [in the league against Wolves]."