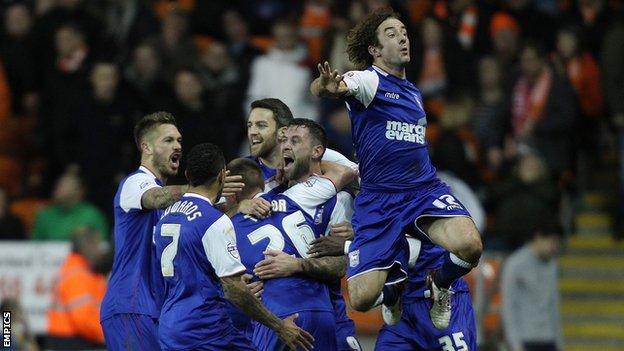 Ipswich striker Frank Nouble has said his side will feel they can compete with the Championship's promotion-chasers after beating Blackpool.

was Town's first win over a top-six side this season.

"We've got some big teams [coming up]. Blackpool were a big team but I didn't really think they were that good," Nouble told BBC Radio Suffolk.

"Hopefully we can do well against the Leicesters and other teams doing well."

Victory over the Seasiders was a first win in six games for Town, who host second-placed Leicester City at Portman Road this weekend and travel to play-off hopefuls Nottingham Forest in December.

Nouble came off the bench to score against Blackpool - his first goal of the season.

The 22-year-old has made just two league starts this term and regarding his performances.

"With the games coming now hopefully we can kick on and get some points," said the former West Ham and Wolves forward.

"As long as I'm on that pitch and can get some time to help the team, I'm happy.

"Apart from two starts, it's the longest I've been on the pitch all season. I'm really happy."