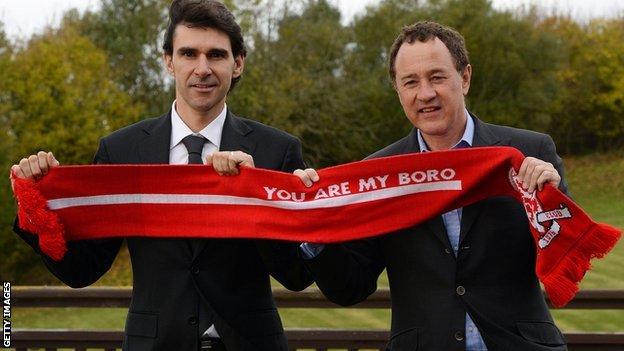 Consistent. That is what Middlesbrough's attitude to managers has been.

The club's previous three bosses all departed in the month of October, while every one of the 29 that have filled the hot-seat have been British, surely to be made aware of Cleveland's penchant for the parmo soon after their appointment.

It is doubtful Aitor Karanka has heard of the Teesside delicacy and Wednesday's press conference was far more straight-laced than Wigan's in 1995, when owner Dave Whelan famously encouraged a trio of Spanish signings which included Everton boss Roberto Martinez - nicknamed the "three amigos" - to tuck into some local pies.

As a Spaniard, Karanka's appointment as head coach is a historic moment for the club, and interestingly he is also a rookie at senior level - although that is not unusual on Teesside.

Novice boss Jack Charlton led Boro in the 1970s and more recently Gareth Southgate was allowed to cut his managerial teeth in 2006.

Perhaps most notably, Steve McClaren left his role as assistant to Sir Alex Ferguson at Manchester United and took Boro to a first ever European final, two years after winning the League Cup - the club's only major honour.

They were different. Charlton was born and raised an hour north in Ashington and forged a playing career an hour south with Leeds. Southgate was Boro captain when he stepped up to the hot-seat. McClaren was a Yorkshireman.

So where has Karanka come from?

Born in Vitoria, Spain in 1973, the young defender joined Athletic Bilbao, the leading Basque team, as a 17-year-old.

He went on to play over 100 games for the club and in 1997, manager Jupp Heynckes swapped the San Mames stadium for the bright lights of Real Madrid's Bernabeu, taking Karanka with him.

"He is a strong personality and his English is good, but not many people know about him as a manager," Spanish football journalist Guillem Balague told BBC Tees.

"If you predict, you have in mind the clubs he played for. He will like offensive football and demand his players keep possession, but really, we are guessing."

Karanka enjoyed a five-year spell with Real that pocketed him three European Cup winners' medals and a La Liga title.

Another stint with Bilbao followed before he signed off his career by playing the 2006 MLS season for Colorado Rapids.

"Despite his successful playing career, Karanka is more vividly remembered for his spell as Mourinho's assistant at Real Madrid.

"Initially, his role was relatively low profile. That changed last season, when Mourinho's relationship with the Spanish media deteriorated to such an extent that he refused to attend press conferences, instead sending Karanka.

"Karanka showed himself to be a diplomatic communicator, able to maintain fairly calm waters and managing to avoid being too closely associated with the Madrid media's brutally negative verdict of Mourinho's reign.

"As a player he was an accomplished defender who played the full 90 minutes in Real's 2000 Champions League final victory over Valencia.

"Among his team-mates that day were future Boro boys Geremi and Christian Karembeu; it would be interesting to know whether they have briefed him about life on Teesside."

Four years later, after it seemed Karanka had dropped off the football radar, he appeared alongside Jose Mourinho when the Portuguese was unveiled as Real Madrid manager.

"Working with Mourinho he was always doing some of the dirty work," Balague explained.

"He would be speaking with the press or setting up the training sessions but he always followed the manager's lead.

"I think that experience will be great for him now and, honestly, I think the backing of Jose was probably crucial in Middlesbrough's decision to appoint him."

Spain's football anoraks will scoff at the idea that Karanka had disappeared before joining Madrid - he was busy rearing the country's youth players.

First he worked in a development role for the Spanish Football Federation and then coached its Under-16 team until "The Special One" came calling.

"It is not fair to say he has no experience," said former Boro and Spain midfielder Gaizka Mendieta.

"He has great knowledge. He has coached with the Spanish federation, worked with Mourinho and played for two big clubs. He has three years of learning from one of the best coaches in the world.

"Aitor could have followed Jose to Chelsea, in Spain many people believed he would take over at Valencia - this tells you how highly thought of he is."

Karanka's arrival at the Riverside comes a week after the club announced it had agreed a youth link-up with Atletico Madrid.

During his spells at Porto, Chelsea, Inter Milan and Real Madrid, Jose Mourinho has consistently had a large backroom staff.

Of those who have worked under him, four are now managers in their own right in England.

For a club that until last month was managed by Tony Mowbray, a man born and raised in Cleveland, it is a dramatic change.

"I think it's overdue, a fresh start like this has been needed for a while," said Mendieta. "The decline has been far too long. The fans need some excitement to bring their enthusiasm back.

"But it is still Middlesbrough and they should not forget that. There has to be at least one person who understands the league, the academy - everything about the club.

"You could say that appointing a Spaniard who has not managed and has no experience of England is a risk. I would say it is a risk worth taking."

It will be interesting to see whether Karanka risks a trip to his local takeaway to sample some bread cutlet.

If his reign proves as successful as the last renowned right-hand man that took up the Riverside reins, do not bet against the Spanish shift stretching to paella-flavoured parmos being dished up on Teesside.