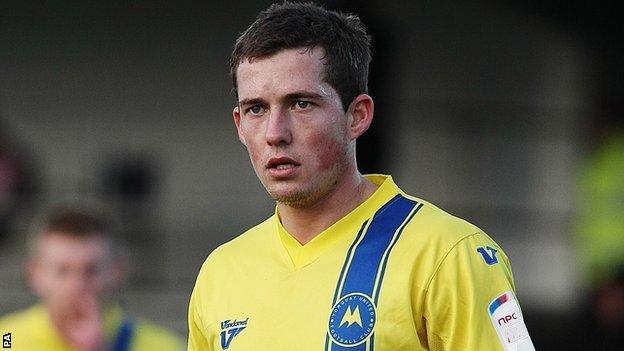 Hereford manager Martin Foyle has paid tribute to a section of the cash-strapped Conference Premier club's fans for funding his latest signing.

Torquay United midfielder Damon Lathrope made his debut in Tuesday night's 2-2 home draw with Chester having been signed on a month's loan.

But the wages for his scheduled stay will be paid by the Hereford United Independent Supporters Association.

"I say a big thanks to the supporters' club," Foyle said.

Hereford United's new share issue has so far yielded around £40,000, but the Bulls' board are still seeking bigger investors.

"£40,000 is not to be sniffed at," Keyte told BBC Hereford & Worcester. "But we're linking the whole scheme against some capital projects, which should be attractive to bigger players. We've not been able to attract those as yet. And, to start doing the development, we've got to reach figures closer to half a million than £40,000."

"Without them paying his wages, Damon Lathrope wouldn't be here.

"I've got to get rid of players. I had to get one or two off the wage bill, so Chris Sharp had to go to Lincoln to see if he can get his confidence back, and I had to send Kevin Krans back to Bristol City.

"I was just so desperate that I phoned HUISA and they came up with the goods and we've been able to get another player in."

Foyle was fairly pleased with his side's overall performance against part-timers Chester, having been denied victory in a tale of two keepers at Edgar Street by two errors from Hereford's Dan Lloyd-Weston and a stunning display from City custodian John Danby.

"The spirit we have shown in games has never been questioned," Foyle told BBC Hereford & Worcester. "We're just lacking that little bit of quality."

Bulls chairman David Keyte has also made it clear that, despite the Bulls' winless seven-match run in the league, given the financial restrictions he has to work under, Foyle's position is not under question.

"We plan to keep him as long as he wants to be here.

"There's three or four players who maybe haven't quite done it for him.

"But we still think we can get on a run that could take us on up the league."