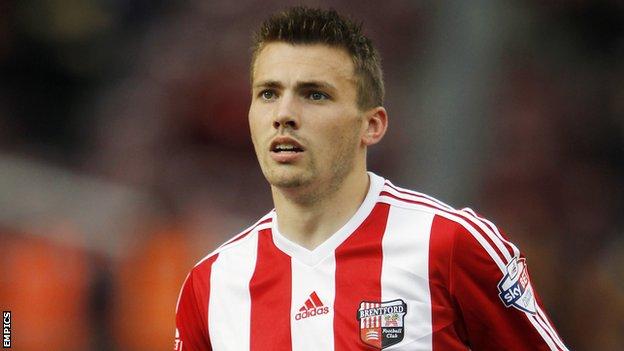 Brentford winger Stuart Dallas has signed a new contract with the League One club.

The 22-year-old Northern Ireland international, who is currently on loan at Northampton Town, will remain at Griffin Park until the summer of 2016.

"Stuart has made steady progress since he joined us," Brentford manager Uwe Rosler told the club website.

"Stuart has proved himself to me. I am very pleased with his attitude and his willingness to work hard."

He added: "He deserves a new contract and he is the type of player we want at the club.

"I am happy for him and I am sure in the years to come he will be an important part of the club."

Dallas joined the Bees in summer 2012 from Crusaders and has made 16 appearances in total for the west London club.

He is on loan at Northampton until 1 January and has scored twice in six outings for the Cobblers.

Brentford sporting director Mark Warburton is impressed with how Dallas has adapted since his move from Northern Ireland.

"The manner in which he has adapted to the demands of full-time professional football at League One level has been outstanding," Warburton said.

"He has dealt with significant challenges both on and off the pitch, always maintaining a first-class attitude and focussing on realising his undoubted potential."