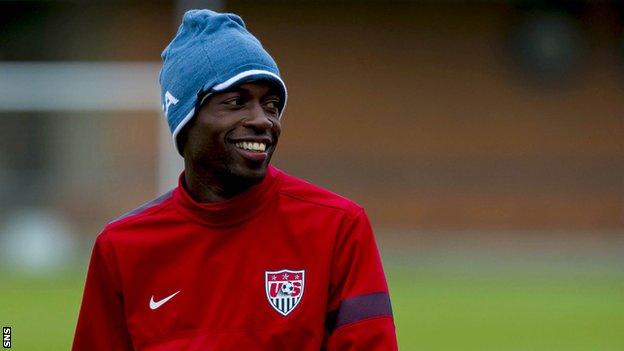 DaMarcus Beasley is expecting a full-blooded affair when his USA side take on Scotland at Hampden on Friday.

"Scotland is improving with the new coach and they are playing the football Scottish fans want to see," he said.

"They are building for the European qualifiers, so they have a lot of things to fight for, just like us.

"We are pushing for World Cup spots and they are trying to make their national team better, so it's going to be a good game and not so much of a friendly."

Former Rangers midfielder Beasley, 31, aims to make a fourth World Cup appearance in Brazil next summer, with the US preparing for their seventh consecutive finals.

Scotland, who have not been on international football's main stage since 1998, were hammered 5-1 in a Florida friendly in May 2012.

But Beasley anticipates a much closer contest in Glasgow.

"I wouldn't say we were the favourites because Scotland are at home but we've been playing pretty well," he said.

"We're excited to be in Europe and this will be a good test for us."

Beasley is currently playing for Puebla in Mexico and has been converted to a full-back by national coach Jurgen Klinsmann.

"It's been a transition but one I'm enjoying," he explained.

"I try to get forward as much as I can. Jurgen gives me the freedom to get up and down the line.

"I'm just excited about being part of the team and hopefully I can book my spot in Brazil."

Klinsmann is without star man Landon Donovan through injury, while those involved in the MLS play-offs, like Kyle Beckerman, Graham Zusi and Brad Davis have been excused the trip, which also involves a game against Austria next Tuesday.

"We've got a strong squad; we've got two or three guys for every position," said Beasley.

The USA's best performance at a World Cup came in 2002 when they reached the quarter-finals, while they lost to Ghana in the last 16 in 2010.

"It all depends on the draw," said Beasley of his nation's prospects in Brazil.

"Hopefully, we can play with confidence and get out of our group; that is our main goal and, after that, anything can happen."