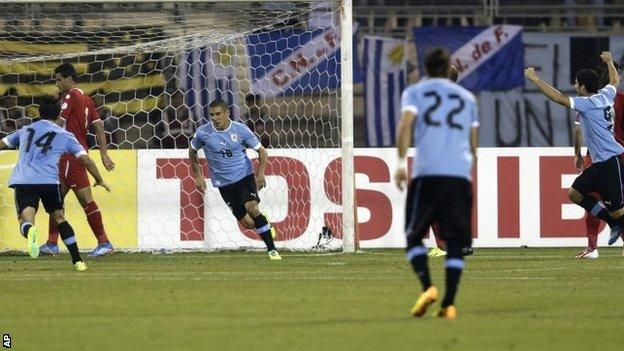 Uruguay thrashed Jordan 5-0 to take control of their World Cup play-off tie and take a huge stride towards qualifying for next summer's finals.

Maxi Pereira prodded in a rebound to open the scoring before Christian Stuani slotted in a second.

Ahmad Ibrahim missed a glorious chance for Jordan and Nicolas Lodeiro sealed the result from 20 yards.

Cristian Rodriguez added a fourth and Edinson Cavani a superb free-kick to all but eliminate Jordan.

The 1930 and 1950 World Cup winners - who have required play-offs to reach the last three finals - with the outcome seemingly a formality.

Uruguay had finished fifth in South American qualifying, edged out of the automatic places by Ecuador on goal difference, but with Liverpool striker Luis Suarez partnered up front by Paris St-Germain's £55m striker Cavani, they were always likely to have too much firepower for Jordan. The Middle East nation, who had beaten Uzbekistan in Asian qualifying to reach the play-off, have never appeared at the World Cup.

Suarez should have scored inside five minutes but shot over after Rodriguez had crossed from the left.

Pereira did open the scoring when Cavani's header was parried clear by goalkeeper Mohamad Shatnawi, before Lodeiro lofted a clever pass over the top of the defence and Stuani finished at the near post.

Jordan started the second half on top and could have found a way back into the tie when Ibrahim missed a glorious opening, side-footing wide from six yards.

And Uruguay went on to put the tie out of reach.

First Cavani rounded Shatnawi to set up Lodeiro, who lofted cleverly into the roof of the empty net, before Rodriguez cracked in a half-volley from 15 yards.

Cavani then scored the goal of the night in stoppage-time, arcing a brilliant free-kick into the top corner from 25 yards.

"This result will put us in a good position for the second leg.

"We will play with the same formation to honour the Uruguayan fans who will fill the stadium next Wednesday, as I heard that 60,000 tickets were sold."