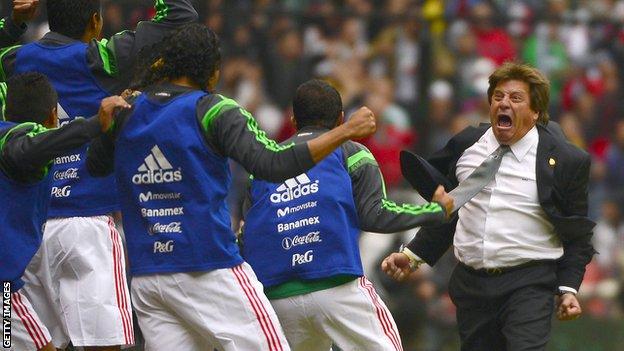 Mexico took a big step towards the World Cup finals with a 5-1 win over New Zealand in the first leg of their qualifying play-off.

New Zealand at the World Cup

Chris James grabbed a late consolation goal for the Oceania champions at the Azteca Stadium in Mexico City.

The return leg will be held in Wellington next Wednesday.

After scoring just three goals in their last four Concacaf qualifiers at home, Mexico rediscovered their attacking touch as they outclassed their opponents.

Defender Aguilar opened the scoring in the 32nd minute after a mix-up between New Zealand keeper Glen Moss and centre-back Andrew Durante, and Jimenez quickly headed in a second to give Mexico a 2-0 lead at half-time.

Striker Peralta scored twice in the second half - both moves involving Miguel Layun - and former Barcelona defender Marquez added the fifth before James pulled a goal back for the visitors with a shot that went in off the post.

The winners of the two-leg tie will advance to next year's tournament in Brazil.

Mexico had struggled in their qualifying group, winning just twice in 10 games, and Herrera last month became their fourth manager in six weeks.

New Zealand qualified for the 2010 World Cup in South Africa after a play-off victory against Bahrain but Ricki Herbert's team now face an uphill task to repeat that feat.