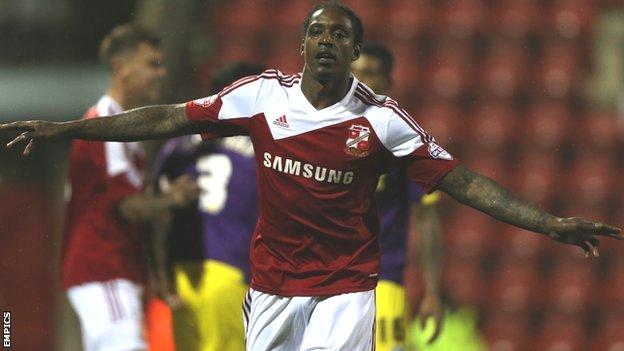 Swindon striker Nile Ranger has failed to report to training after being given a period of leave by the club.

Manager Mark Cooper confirmed to BBC Wiltshire on Thursday that the 22-year-old was given time off last weekend to deal with "personal issues".

But the Town boss went on to say Ranger had not turned up to training prior to Saturday's game with Colchester.

When asked about the player's whereabouts, Cooper responded: "I don't know. That's all I'm prepared to say."

Ranger, who is based in London, has scored six goals in 16 appearances since joining League One Swindon in the summer on a one-year deal.

It is thought he missed a team meeting prior to Saturday's FA Cup defeat by Macclesfield, and was not in the squad for the 2-1 Johnstone's Paint Trophy win against Wycombe on Tuesday.

"He was never going to play on Tuesday but he was supposed to be in for training today," added Cooper.

"But people should be concentrating on the players who played on Tuesday and that will play on Saturday."

Ranger previously played for Premier League side Newcastle but left the club by mutual consent in March.

He is due to appear in court in the new year after being charged with rape, in connection with an alleged incident at a hotel in Newcastle's Jesmond area in January.

He denies the charges.