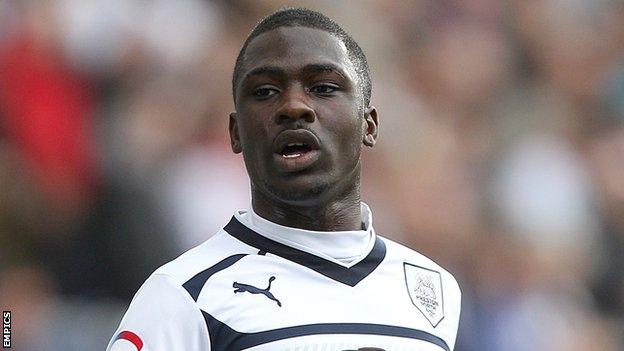 Jeffrey Monakana has been told to prove himself to Preston boss Simon Grayson or risk not being offered a new deal.

And with his contract expiring in the summer, Grayson wants to see him produce more consistent performances.

"I don't need a player who's only going to be effective for 10 or 15 minutes. That type of player is no good to me or any other manager," he said.

"It's come to a stage where Jeffrey needs to really grasp everything that we want him to do. Jeffrey may be in the 'last chance saloon' with us because his in the summer."

Former Arsenal youngster and has made a total of 49 appearances for the League One club, scoring six goals.

If he wants to be a success with us, he has to do a lot better

He played nine times for Colchester, scoring on his debut at Bradford.

Speaking to BBC Radio Lancashire, Grayson continued: "He's got some raw talent, but he has to make sure he does everything else that's required to make a footballer. We've brought him back to give him that time.

"He has to grasp everything we throw at him. If not, he could be a wasted talent. He's had decent games, don't get me wrong, but the penny hopefully has dropped now. If he wants to be a success with us, he has to do a lot better."

On Thursday, until January and the Australia international could make his debut against leaders Leyton Orient at the weekend.