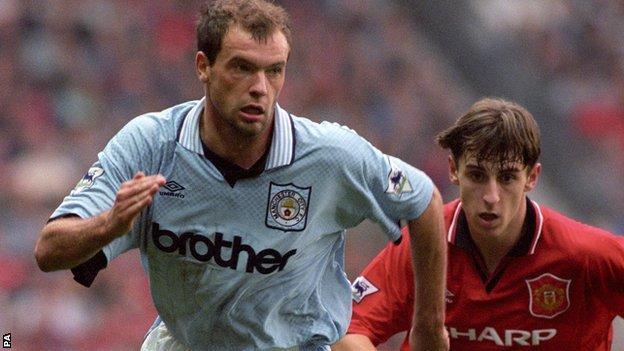 In pride of place in the study at Uwe Rosler's home in a leafy Stockport suburb is a reminder of his cult status with Manchester City fans: a framed T-shirt bearing the legend 'Rosler's grandad bombed Old Trafford'.

The claim was a light-hearted - and entirely fictitious - terrace chant about the time the Stretford End was hit by a Luftwaffe raid during World War II, sung by City fans during the 1990s in honour of their popular German striker.

A bustling frontman, Rosler scored 64 goals in 176 games for the club, giving supporters something to smile about during the dark days of that decade, when City were relegated twice and tumbled from the Premier League to the third tier of English football in three seasons.

Now another Rosler could be about to make his mark on Manchester too.

Uwe's son Colin, who is 13 and named after City legend Colin Bell, plays as a midfielder or right-back and is learning the ropes in their academy team.

Colin grew up a Blue but, if he is going to follow in his father's footsteps by becoming a City hero as well, he will have to take a very different route to the top.

Currently boss of League One side Brentford, Rosler's career followed a unique path that started at the age of 11 when he left home to join a specialist sports academy in the former East Germany, saw him have a brush with the Stasi before the fall of the Berlin Wall and, eventually, become one of the first foreigners in the Premier League.

Comparing father and son's coaching at an early age offers a contrast between communism and rampant capitalism. Rosler Sr's tutelage was highly disciplined but primitive. Colin, meanwhile, benefits from the experts and sports scientists employed by one of the world's richest clubs.

"People always ask me how I would do if I was a player at City now," Rosler told BBC Sport as he showed off memorabilia from his playing days for the Football Focus cameras, including Stefan Effenberg's shirt from the time he played for Kaiserslautern against Bayern Munich in the quarter-finals of the 1999 Champions League.

"Obviously some of the City players now are breathtakingly good but the training and fitness regimes are not comparable with my time. Doing what they do, we would have been better players as well.

"How far I would have gone? I cannot answer that. But, when I compare my training to the training my son receives, it is from a different planet."

Away from football, Rosler's early life as a young professional in a repressive regime was also in stark contrast to the luxuries enjoyed by his contemporaries in the modern game.

His motivations were food tokens, not fast cars, and he knew the cost of failing to keep his standards high.

Each year, players who did not perform would be dropped from the sports programme and faced a future as mechanics or electricians on the Leipzig railway instead.

Then there were the secret police, who tried to recruit Rosler to spy on his team-mates. "I was frightened my career would be over because I said no, but my dad and my coach protected me," he recalls.

Rosler's remarkable story is told in full in his new book 'Knocking Down Walls' which also describes how he beat cancer before embarking on his managerial career.

On the face of it, the struggles he faced, not to mention the sacrifices he made, might offer a few useful life lessons for any other budding professional footballer wondering what sort of work ethic it takes to make the grade.

But, far from feeling envious of the opportunities and rewards offered to today's youth, Rosler feels he had it easy compared to players trying to forge a career now.

"These days I think it is very difficult to be a young player," Rosler explained. "In Western Europe, not just in England, their life is a totally different environment to the one I grew up in.

"I was very fortunate to grow up for 20 years in a different political system. I had far less disturbances and distractions than they face in society now. Then there is the influences of elements like parents, agents, money and girlfriends.

"It is easy to say that young players are pampered and they have it easy now. I see it quite the opposite, I think they have it quite hard. You need to have a strong will to succeed no matter what.

"I was very focused on what I wanted to do. To be selected for the school I went to was a privilege but to stay there was very tough.

"One year I had injuries and feared I would be axed, but living under that sort of pressure shaped me."

The globalisation of football has not made it any easier to make the breakthrough. City's wealth does not help their young prospects either.

"The competition is much harder than it was when I was growing up," Rosler added.

"Back then, the best local kids would play in a team, and then there would be the best from your district. At the very top, you would be against the best kids in the country.

"Now, wherever you are playing, you are you competing against a kid from China or Africa or anywhere in the world.

"In Western Europe, the young kids have a relatively high standard of life. When they come from other countries, they are with their backs against the wall and they do everything to succeed because they have got nothing to go home to.

"It is sometimes hard for the Western kids to match that hunger."

City are a prime example of a team who no longer just mine for local talent.

In the same U13 squad as Colin for last summer's prestigious Roma International Cup was an American, an Angolan, a Spaniard and two Germans. Colin himself has Norwegian nationality after spending most of his early life there.

Can he make the grade? That famous T-shirt and chant might have to be changed to 'Rosler's great-grandad' if he does.

"I think if you are at City you have been chosen on merit and obviously Colin has a chance, but the bar is so high." Uwe said.

"It is going to be very difficult for him, you have to be honest. But what you know you get from City is a very good football education and, if you work hard you can make a living from football elsewhere.

"At City, there will probably be one from 200 who makes it to the first team there and Colin knows how hard it will be. I am not sure all of them know it, but my one does."