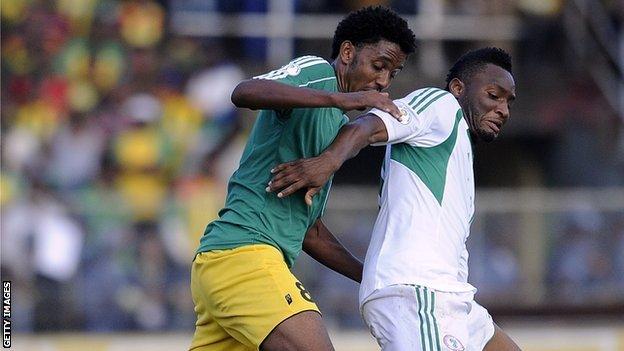 The match between the Super Eagles and Ethiopia is the first to kick off on Saturday, with Senegal hosting Ivory Cost later the same day and Cameroon welcoming Tunisia on Sunday.

The remaining two ties of the round - Egypt v Ghana and Algeria v Burkina Faso - will be played on Tuesday.

The five aggregate winners of the ties will qualify for next year's tournament in Brazil.

Nigeria are favourites to book one of the berths as they hold a 2-1 lead from the first leg in Addis Ababa last month and will have home advantage in Calabar.

However, coach Stephen Keshi has warned that Ethiopia still pose a major threat to Nigeria's bid to qualify for a fifth World Cup.

"Ethiopia are still a threat because they are a very good side and have been together for up to five years, unlike our team which is relatively young and new," Keshi said.

"And so we have not qualified, but on the verge of doing so and we must not let down our guards at this crucial moment.

"Gradually, we are getting to where we want to be and by Saturday hopefully we should be among the 32 nations whose flags will be flown at the Brazil 2014 World Cup."

Keshi is without Real Betis midfielder Nosa Igiebor and Uche Nwofor, from Dutch club Heerenveen, who have dropped out of the squad because of injury.

But Chelsea defender Kenneth Omeruo, Gabriel Reuben from Scottish club Kilmarnock, and United States-based striker Bright Dike are all back after long-term injuries.

Ethiopia have been boosted by the return of South Africa-based striker Getaneh Kebede, who has scored four goals in the qualifiers but missed the first leg with an ankle injury.

"The return of Getaneh is really great news. I've seen him in training. He's fit and will definitely have a role in the battle," said Ethiopia coach Sewnet Bishaw.

"I'm 100% confident of overturning the result. I'll only play for a win. Football involves a defeat and a win. We're defeated in the first leg doesn't mean we'll be defeated in the second leg.

The Ivory Coast's 3-1 win in the first leg in Abidjan was a big step towards their third World Cup appearance and Saturday's return leg will be played in Casablanca, Morocco.

The switch to a neutral ground follows a riot last year during qualifying for this year's Africa Cup of Nations.

The Elephants will be without defenders Arthur Boka and Siaka Tiene, who are both injured, as well as Newcastle midfielder Chieck Tiote, who is suspended.

In a surprise move, Senegal have dropped Demba Ba for this clash, amid suggestions of differences between the Chelsea striker and French coach Alain Giresse.

But Giresse urged his side: "We have to believe. We will go there with the idea of making up the two-goal deficit against the Elephants."

On Sunday Cameroon, who have made it to the finals six times, host Tunisia in Yaounde with the score level at 0-0 in no small part because of several crucial saves from goalkeeper Charles Itandje.

Cameroon have been boosted by the return of Stephane Mbia and will again be led by Samuel Eto'o, who is finding his feet in the English Premier League with Chelsea after being off-loaded by Russian Premier League outfit Anzhi Makhachkala.

And the Indomitable Lions captain has vowed to set aside his long-running differences with the Cameroon Football Federation to achieve qualification.

"We are all Cameroonians and I don't want polemics ahead of this game, Sunday we have to do everything to qualify," Eto'o said.

"Let's bury our differences to qualify the team for the World Cup."

Tunisia's Dutch coach Ruud Krol said he expected Cameroon to attack in contrast to their mainly defensive approach in the first game.

"We played to score while trying not to concede a goal. In Cameroon, we will play to keep a clean sheet while trying to score," said Krol, who will manage Tunisian club CS Sfaxien in the Confederation Cup final next weekend.

Krol has made seven changes to the squad from the first leg, adding more attacking options by including the likes of Ahmed Akaichi of Esperance.