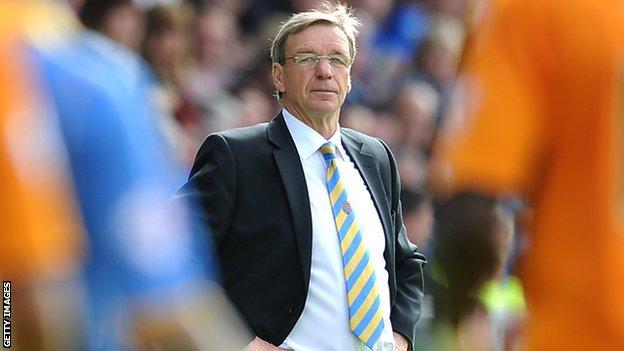 Graham Turner suspected that he might be on borrowed time when he first became a football manager back on 21 November 1978.

He was only 31, having not long become player-coach at Shrewsbury Town.

What is more, after initially being told that he probably only had a week to prove himself, he was then given just six matches.

Appropriately enough, 'Rat Trap' by The Boomtown Rats was number one in the charts the week Turner first took charge in this ultimate of sporting rat races. And, as it turned out, he had been caught.

Thankfully for centre-half Turner, his Shrewsbury team did not lose any of those first six matches, he got the job permanently and his team went on to get promotion from Division Three.

And, 35 years and almost 1,700 matches later, Turner is still out there patrolling the touchline at Shrewsbury, in his 50th year in the game at the age of 66 with the same looming, patient, powerful presence he has brought to the job those past three and half decades.

This heart-warming story of a nice guy who certainly did not come last has not, of course, all been played out in the rural surrounds of supposedly sleepy Shropshire.

There was his excursion to the big city to take charge at Aston Villa for two unsuccessful years, followed by his managerial redemption at Molineux with Wolves who, with the considerable help of a bargain £35,000 buy from West Brom, Steve Bull, he took from apparent financial ruin in the Fourth Division back to the second tier.

He then spent 15 years down in even sleepier surrounds at Edgar Street, first as manager of Hereford United, then as chairman, even doing both jobs together as the Bulls suffered relegation from the Football League before bringing them back up again.

And, finally, in 2010, he came back to Shrewsbury, where his managerial merry-go-round all started.

But Turner is the first to admit that, if he had not made a success of that first job, he would have walked away from it all.

"I felt, having been in charge for six matches, I could not go back to being a player with the others," he told BBC Radio Shropshire.

"It was a do or die thing. If I did not get the job, I felt I would have to leave. It was almost as cut-throat as that.

"I did not think I had the attributes to be a manager. At 23, I was still taking O-levels, with a view to training to become a teacher.

"I had joined Richie Barker as player-coach after Alan Durban left for Stoke in that summer of 1978.

"I then remember Richie telling me that he'd had an offer from Wolves to be assistant manager [to John Barnwell] and that he was going to go.

"The Shrewsbury board asked me to take over as caretaker, with the view that I was too young to be manager.

"As well as being so young, being player-manager made it even more difficult.

"You have to try and distance yourselves from the players but then, at Saturday afternoon at three o'clock, you're one of them.

"There was probably a six-game probationary period while they sorted out applications and interviews.

"And I don't think I had a formal interview. It was just a matter of having had some really good results

"I remember winning our first game 2-0 down at Peterborough and the players worked tremendously hard for me.

"That set the standard but there was one precarious moment when we were one down at home to Gillingham in our next game and got a late equaliser. After that, I thought I'd done enough to justify the position."

And the rest, of course, for a lad from an Ellesmere Port council house who left school at 15, is history.

TURNER'S FIRST TIME WITH THE TOWN

"We had some great performances, not only in the league, but also with our run in the FA Cup.

"We beat Manchester City at the Meadow with all their stars.

"Then we went to Molineux and got a draw against the mighty Wolves, as they were then, before being well beaten in the replay.

"We had good players; like Paul Maguire, Jack Keay, Jake King and Ken Mulhearn. And we had good spirit.

"Then that final game against Exeter; a win would have got us the Third Division championship, a draw got us promotion. We won 4-1 and there were people on the pitch.

"We did not set things alight when we first went up to Division Two, but the turning point was at Stamford Bridge when we beat Chelsea 4-2.

"That helped us settle down and we did well for a number of years."

LABOURING IN VAIN AT VILLA

"I had a couple of calls, one from Sheffield Wednesday and one from Manchester City, where I had an interview but they went for Billy McNeill. Then the call came in from Villa.

"We didn't see eye to eye on the first meeting. And I remember talking to my solicitor, who said 'The contract... you could drive a bus through it. But you either take up the challenge of going to a big club or stay put'. So I went for it.

"I did not take any of my own people in there that I knew well. That was my first mistake.

"Secondly, we put too much money into too many young players. I can reel them off. People who went on to play for England. Steve Hodge, Paul Elliott, people like Mark Walters and Tony Daley and Tony Dorigo were coming.

"And I cancelled a trip to Mauritius to sign Martin Keown from Arsenal. We had the nucleus of a very good side but at that level there's no patience. Results have to be instant.

"I got a call from the chairman on the Sunday morning saying we're having a board meeting at my house. It does not take a genius to work out what's going to happen next. I changed into my suit, the kids said 'Where are you off to Dad?' I said 'I think I'm going to get the sack'. And I went off for my walk round the garden with the chairman. But, within three weeks, I'd been approached by Wolves, so there wasn't too long to dwell on it."

ALMOST ALL THE WAY AT WOLVES

"Wolves had gone from the top division to the bottom. It was a broken-down club. The ground was in a terrible state. There was a bucket to catch the drips in the dressing room. And we'd lost the training ground. We'd got no kit, no balls.

"If there was ever a defeatist attitude in the fabric at any club, it was Wolves. I would not even have considered going there had it not been for the fact that they were the club I supported as a boy. I took the job simply on sentiment, the ghosts of Stan Cullis and the rest.

"I wasn't a popular appointment. They told me I was going to get some stick at my first game against Tranmere, so I went out and bought a pair of gold earmuffs. But, fortunately we won. Frank Worthington was their player-manager. He got sent off for slapping and that made it a bit easier.

"Then we went and lost in the FA Cup against Chorley in a first-round replay at Burnden Park. Everybody thought that was the final death knell of a great old club. Going in the following morning there were several national newspapermen ready to put the final nail in the coffin. In fact, we never looked back.

"There's a great deal of pride in the seven and a half years I spent there turning them round to get within shouting distance of the top flight. But not quite doing it was a major disappointment."

"Having left Wolves, after the job I'd done there, I thought I'd have no trouble getting another job. I was out of work for 16 months. I didn't think I'd finish with a club as small as Hereford.

"If there can be devastation at a football club, it was that afternoon when we were relegated from the Football League. I've never seen a dressing room with so many grown men crying. I've never experienced anything like that in my life. I got sacked at Villa, I resigned from Wolves, but this was the worst day of my managerial career.

"The most foolish thing I've ever done was to buy shares in the club. We were in serious financial difficulties. It seemed like a good idea at the time, but it was only then that the real debts began to come out of the woodwork.

"I remember drawing Martin O'Neill's Leicester City in the Cup and the bank manager was straight round to find out what sort of profits we expected to make. At one time we were seven months behind with the wages. If there was nothing left at the end of the month, my secretary Joan Fennessy and I were the only two who did not get paid.

"But I found out what it was like to run a football club. And to finish up turning the club round, eventually getting back into the Football League, spending six or seven years in profit, and leave a substantial amount of money in the bank, I can look back on that with a lot of pride."

BACK TO A NEW MEADOW

"You think back to the big games that we had at the old Meadow in the Division Two days against teams like Chelsea, Newcastle and West Ham and you have this belief that perhaps we can do the same again.

"But the game has become more difficult for smaller clubs. Money talks. The haves have plenty, and the have-nots very little. We're in the same division as Wolves this season. They probably have a parachute payment of £18m. They get gates of 17,000. There's the difference. In the old days, the gap wasn't that great, in terms of finance. Now it's enormous.

"But you don't lose that enthusiasm. You don't lose the drive. I went to a game on Monday, did not get back until midnight and then I was up at 5.30 the next morning. That's the time when you find out whether you still have the resolve to do it at my age and I haven't got any doubts about that. I'll know when the time is right to call it a day, I won't kid the club or myself."