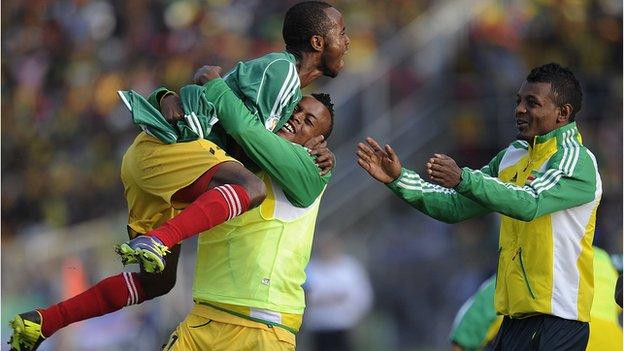 Ethiopia coach Sewnet Bishaw has vowed his men will give whatever it takes to overturn a first-leg defeat when they take on Nigeria in their World Cup play-off on Saturday.

Ethiopia hope to continue their surprising World Cup journey when they face Nigeria in the return leg, despite a 2-1 loss at home in mid-October.

Bishaw told BBC Sport: "This is the biggest match of my life. I want to win it. I'll fight to the maximum.

"There's no problem in my squad. All of my players are fit and the mood in the camp is very high. Everybody is waiting for the kick-off whistle."

Nigeria won the first leg in Addis Ababa courtesy of a brace from Emanuel Emenike and the Super Eagles are clear favourites to book a place at next year's tournament in Brazil, which would be their fifth appearance at a finals.

However, Bishaw is confident his side can come back.

"I'm 100% confident of overturning the result. I'll only play for a win. Football involves a defeat and a win. We're defeated in the first leg doesn't mean we'll be defeated in the second leg," he said.

Bishaw revealed he will leave it until the last moment possible to select his side in the quest to take the east Africans to their first finals.

The big boost for Bishaw is the return of his joint top scorer, Getaneh Kebede. The striker missed the first leg of the play-offs because of an ankle injury.

"The return of Getaneh is really great news. I've seen him in training. He's fit and will definitely have a role in the battle" Bishaw said.