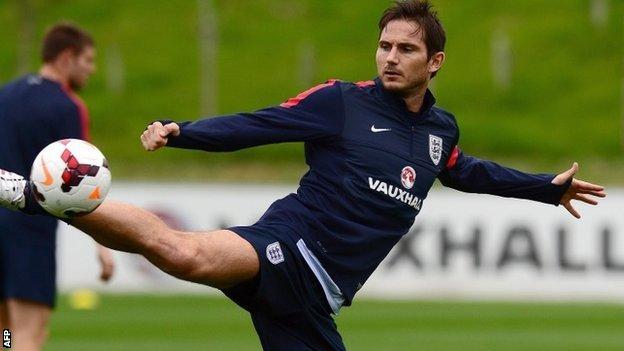 Frank Lampard leads England out against Chile at Wembley on Friday admitting he is fighting for his World Cup place in Brazil.

The 35-year-old Chelsea midfielder will win his 103rd cap in the friendly and captains the side in the absence of the injured Steven Gerrard.

But he knows he is not a certain selection for next summer's finals.

"If I walked around thinking my 103 caps would get me on the plane I would probably be on the beach," he said.

"That means you are taking things for granted and I don't think any of us can afford to do that."

Friday will be a special night for Lampard, who will receive a commemorative golden cap from England World Cup winner Sir Geoff Hurst and father Frank Sr before kick-off after making 100 international appearances.

But England manager Roy Hodgson may eventually have to decide whether to take all three of his central midfield 30-somethings or leave one behind next summer.

Gerrard, who will be 34 when the World Cup starts, is a certainty as captain if fit, which may leave a choice between Chelsea's Lampard and 32-year-old Manchester United midfield man Michael Carrick.

And Lampard accepts form between now and the end of the season will shape Hodgson's eventual selection.

"I think it will be judged mainly on the rest of the season and I think we're all in the same boat there," he said.

"I think what we've done up to now carries a bit of weight, some more than others, but if your form is not good enough in what is quite a big period of time, we are talking six or seven months until May when our season finishes, then we have to accept that."

Lampard's Chelsea team-mate Ashley Cole looks another certainty for Brazil if he is fit and available - but whether he boards the plane as first choice is increasingly unclear as the pressure from Everton's Leighton Baines intensifies following his two outstanding performances in the qualifying wins over Montenegro and Poland that secured England's World Cup place.

Hodgson will use both in the friendlies against Chile and then Germany at Wembley on Tuesday - but Cole, 32, has been left out of Chelsea's last two games following the 2-0 loss at Newcastle United.

The England manager said: "The games I've seen him play, I thought he was playing perfectly well enough but on the other hand it's not for me to pick Chelsea's team. Jose Mourinho has competition for places and has to make decisions.

"From an England perspective I'm still very happy to consider Ashley Cole as a potential English left-back but as you know, and have known for some time, the competition for that spot is particularly fierce because Baines is also playing so well.

"On top of that we have Arsenal's Kieran Gibbs and Luke Shaw from Southampton, two younger players but who I think can definitely put these more senior ones under some pressure.

"I would definitely not be concerned, if there were no Ashley Cole or Leighton Baines, about Gibbs or Shaw playing."