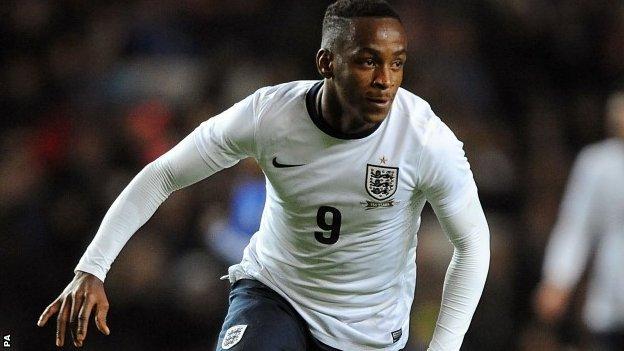 Saido Berahino scored twice as England Under-21s extended their lead at the top of their European Championship qualifying group with a comfortable victory over Finland in Milton Keynes.

Finland were then reduced to 10 men when Patrick O'Shaughnessy saw red.

Berahino hit the crossbar before side-footing his second from 12 yards.

Despite having played two fewer games than Wales, England went into the game at Stadium MK level with their neighbours on 10 points but enjoyed a superior goal difference.

The Finns, who held Gareth Southgate's side to a 1-1 draw in Tampere in September, rarely threatened England's goal as the hosts dominated from the opening whistle.

They took the lead when Keane nodded in James Ward-Prowse's 21st-minute free-kick.

Luke Shaw then burst into the box and hit a powerful low shot that Finland keeper Jesse Joronen could only parry into the path of Berahino.

The Baggies forward made no mistake as he side-footed the ball into the net.

After the break, Ward-Prowse had a fierce shot from the edge of the box pushed away by Joronen as England continued to dominate possession.

However, it was only after O'Shaughnessy was shown a second yellow card - for an ill-timed lunge on Shaw - that England managed to convert possession into clear-cut chances.

Berahino was unlucky to see an effort cannon off the bar after he created space for himself with an excellent drag back.

Down at the other end, and despite having little to do for the opening 80 minutes, England keeper Jack Butland kept his concentration to tip a dipping 25-yard strike from Nikolai Alho over the crossbar.

However, he was finally beaten for a third time in the 90th minute when Jesse Lingard played in Berahino, who side-footed his second of the night under the advancing keeper.

England play their sixth group game against San Marino in Shrewsbury on Tuesday. The game kicks off at 18:00 GMT.