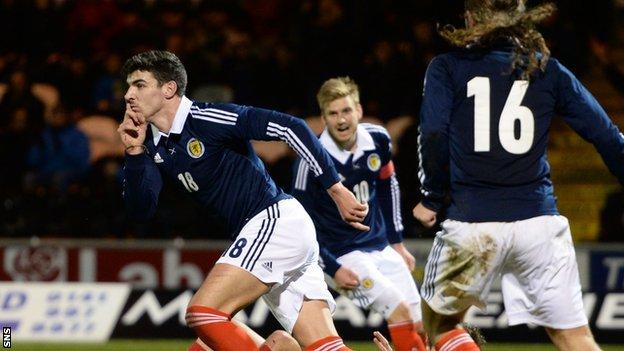 Scotland suffered another blow to their European Under-21 Championship qualification hopes despite Callum Paterson's equaliser against Georgia.

The Scots remain in fourth place in Group Three after the draw at St Mirren Park, three points adrift of Slovakia and Netherlands, who drew 2-2 in Senec.

Giorgi Chanturia opened the scoring for Georgia 10 minutes before the break.

But Hearts forward Paterson came off the bench to equalise with six minutes remaining in Paisley.

Scotland manager Billy Stark had handed a start to Dundee United 17-year-old Ryan Gauld, who was making his debut at this level in midfield, along with club-mate Andrew Robertson and Rangers midfielder Lewis Macleod, who netted in last month's 2-1 defeat in Tbilisi.

Keen to make amends for that defeat, the young Scots dominated the opening spell, but headers from Stevie May and Jordan McGhee missed the target.

Georgia began to impose themselves on the game and Chanturia had already tested goalkeeper Jordan Archer before opening the scoring.

The Vitesse winger cracked a shot in off the post and over the line.

Macleod drilled a shot wide as Scotland started the second half in determined mood, but Lasha Parunashvili passed up a decent chance at the other end from close range.

May had a shot clawed to safety by goalkeeper Giorgi Nadiradze, while opposite number Archer did well to push wide Jano Ananidze's ferocious strike.

However, the Scots were back on level terms when Paterson found the target with an overhead kick following a Kenny McLean free-kick.

With the Dutch remaining strong favourites to qualify as group winners, the Scots' first dropped points at home leave Billy Stark's side level with the Georgians in the race for a play-off spot as one of the best runners-up from the 10 groups.

Scotland Under-21 manager Billy Stark: "If I'm being honest, I can't say it's a game we definitely should have won, but we kept at it in the second half.

"For me, the important thing was keeping an unbeaten home record in the qualifiers and that's a real positive to take out of it.

"At the moment, 16 points is still gettable for us and that means you have a chance of qualifying.

"We have a tough fixture against Holland in our next game. But, if we can win that, we go into the last two games with optimism, albeit we won't underestimate the task of beating Holland here.

"We just have to show a bit more belief in ourselves."