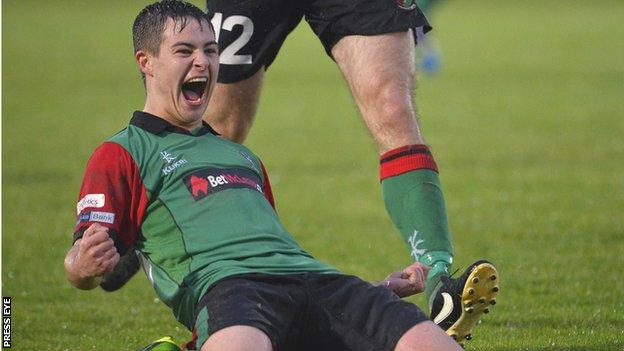 Glentoran pair Jordan Stewart and Jim O'Hanlon are rated doubtful for Saturday's Premiership encounter with Glenavon at the Oval.

Stewart is suffering from flu while fellow midfielder O'Hanlon has a hamstring injury.

Suspensions rule out Stephen McAlorum, Jimmy Callacher and Mark Clarke while David Howland and Aaron Boyd are sidelined because of injury.

The Glens sit third in the table with Glenavon two points back in fifth.

Glenavon will be aiming to bounce back with a win after Tuesday's penalty shoot-out defeat by Ards in the League Cup quarter-finals.

Linfield suffered a similar fate against Crusaders and the league pacesetters go to Dungannon Swifts with a six-point lead to protect.

Glentoran take on Glenavon at the Oval in the commentary game on Saturday Sportsound, presented by Michael McNamee from 14:00 GMT.

Grant Cameron and Chris Morgan will take you through the action from the Premiership clash..

The programme will have reports from the day's other fives games, plus news of the rest of the day's sport locally and further afield.

There's also the draw for the League Cup semi-finals at 17:15.

The Blues are without Michael Gault (ban) and Niall Quinn (ankle) while Michael Carvill (groin) is a major doubt.

"I've told the players that cup competitions are like sprints, whereas the league is a marathon," Linfield manager David Jeffrey told the club website.

"It's vitally important that we refocus on the job in hand when we go to Dungannon which is never an easy place to go.

"I know Darren Murphy will have his players highly motivated, although any time that anybody plays against Linfield there's not much motivating that needs to be done, as everybody invariably raises their game against us.

"Saturday will certainly be tough and its disappointing that it looks like we'll be without one of our most consistent players in Michael Carvill but we're obviously hoping that the players who come in, will come in and deliver."

Dungannon have picked up just two points from their last seven league games and they are missing Michael McKerr (foot) for the Stangmore Park match.

Second-placed Crusaders will be buoyed by Tuesday's win over Linfield although Timmy Adamson is suspended for the visit of Ballinamallard to Seaview.

Ballymena United defender Stephen McBride (knee) could miss the Showgrounds clash with Ards, who are without the banned David Gibson.

Portadown are reeling from the shock transfer-listing of striker Kevin Braniff ahead of their home game against basement boys Warrenpoint Town.

Ports pair Emmett Friars and Shane O'Connor (both knee) are doubts while Town's Darren King and Stephen Moan are suspended.

Coleraine midfielder Stephen Lowry misses the Showgrounds showdown against champions Cliftonville with a knee injury, which will keep him out until January.

Ruairi Harkin (knee) is also out of the game but David Ogilby is back from a ban.