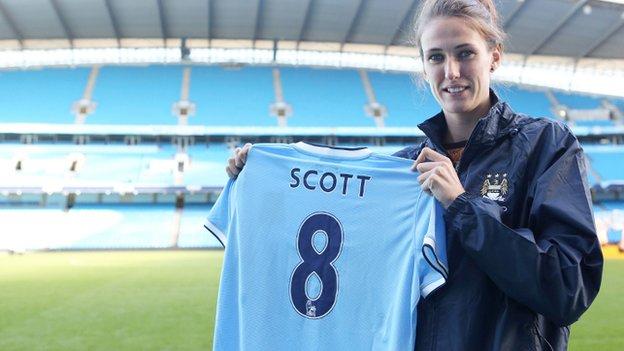 "For me, it's a chance for a fresh start with a new challenge," Scott told the club website.

"It's fantastic to be here and to see the plans that Manchester City Ladies have in place to compete in the first season of the FA WSL."

Scott, who started her career with Sunderland before moving to Toffees in 2006, has appeared in the last two World Cups for England, as well as the European Championships in 2009 and 2013.

She also represented Team GB at London 2012, and captained Everton to fifth place in the WSL last season.

City head coach Leigh Wood said the arrival of the England international was a major coup for a club determined to make an immediate impact.

"If you look back from where we were a few years ago to where we are now - signing a player of Jill's calibre - it's fantastic and will ensure that we are able to compete in the coming season," he added.