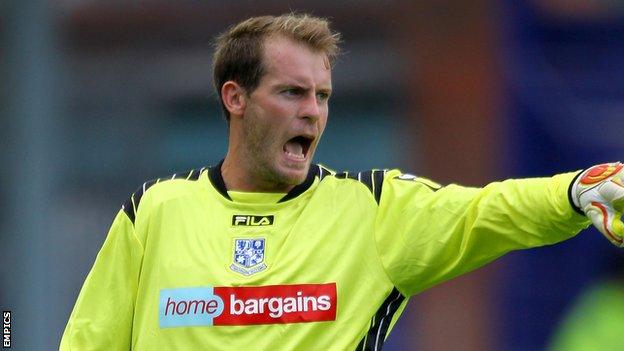 Tranmere Rovers manager Ronnie Moore says it is about time that Owain Fon Williams is given his senior international debut for Wales.

The 26-year-old was called up for Saturday's friendly against Finland after Boaz Myhill pulled out injured.

Nearly five years after first being selected, Moore feels Fon Williams is overdue his chance to prove himself.

"When it is a friendly game, get on with it and have a look at him," Moore told BBC Radio Merseyside.

Owain Fon Williams has kept three clean sheets for League One Tranmere Rovers in all competitions this season.

The 26-year-old, from Penygroes in Gwynedd, has started 110 games for Rovers since his arrival from Rochdale in 2011, making 19 appearances so far this term.

"I hope, touch wood, Fonners will play because you never know until you have a look."

Fon Williams was released from Wales duties last month so he could play for Tranmere against Bradford in League One, and was initially excluded from manager Chris Coleman's latest squad.

Injury forced his latest call-up, but having represented Wales at Under-17 to Under-21 levels, he is the only goalkeeper in the current squad yet to win a senior cap.

And Moore did not get frustrated with losing his first-choice number one for Saturday's game against Bristol City until Crystal Palace's Lewis Price was also called up to join Wolves keeper Wayne Hennessey in Cardiff this week.

"I'm disappointed really because Chris has been brilliant with us, he said that Fonners could stay for this game then the injury came. Then you think, well is he going to get a game or isn't he?" said Moore.

"But then they call up the lad Price from Palace and now they have three goalkeepers there.

"I'm not telling Chris how to do his job, it is a hard enough job to do anyway and he has been doing a fantastic job.

"I'm sure he will know when the time is right."

Moore, meanwhile, will use Jason Mooney as Fon Williams's replacement in goal for Saturday's game.

"We have no qualms about Jason going in there, he has played two games and kept two clean sheets and we look forward to another one from him - not that there is any pressure on him," added Moore.