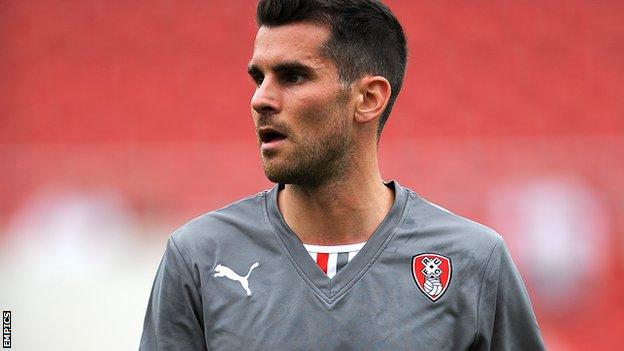 Bury have signed striker Daniel Nardiello on loan from League One Rotherham until January.

The 31-year-old was the Millers' top scorer with 18 goals on the way to promotion last term, and has netted five times in 10 games this season.

It will be his second spell at the JD Stadium, having scored four goals in six games on loan in 2009.

Nardiello, who began his career with Manchester United, is available to face Bristol Rovers on Saturday.

The former Barnsley, Queens Park Rangers, Blackpool and Exeter striker has played 308 games and scored 89 goals during his 13-year career, and also won an international cap for Wales in 2007.

"As a team we have been creating a lot of good chances over the past few games but not had the luck in converting them to goals," caretaker manager Ronnie Jepson told the Bury website.

"By bringing in players such as Danny, this gives us the extra quality to deliver the points needed to push us back into [promotion]contention."