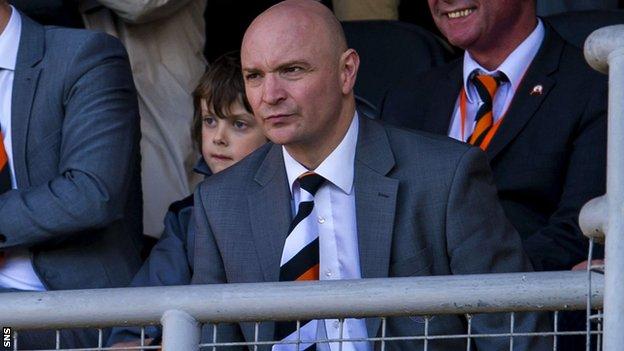 Dundee United's board has approved that means chairman Stephen Thompson becomes majority stakeholder with 52% of the shares.

Cath Thompson, who is leaving the board, is transferring her shareholding to son Stephen, and daughter Justine Mitchell, who is now a director.

And Cath Thomspon has accepted the position of honorary president.

"The change in ownership will have no impact on the day to day running of the club," said director Derek Robertson.

"[This] will continue under the direction of chairman Stephen Thompson and the current directors, with the addition of Justine who we welcomed today at her first board meeting.

"Justine has extensive experience in both law and property and will be a very valuable addition to the board in her own right, as well as cementing the Thompson family commitment to Dundee United.

"The board of Dundee United and, we are sure, all United supporters, would like to take this opportunity to thank Cath Thompson for the invaluable and unwavering support she has provided to the club in her capacity as majority shareholder and vice chair.

"We are forever grateful to her and delighted that she has accepted an honorary position at the club."

United say the new owners will invest a "six-figure" sum as part of the change of ownership agreement.

"Scottish football continues to face challenging times but we have risen to these challenges and will continue to do so," said Stephen Thompson.

"In an acknowledged difficult financial climate, we have posted a profit in three of the last four years, reduced our outgoings, met all of our financial commitments and targets and reduced our long term debt from a peak of £6m to just over £3m.

"Like many businesses we continue to rely on the goodwill and support of the bank, with whom we have a good working relationship, and it was important to demonstrate to them and the board of Dundee United, that our financial commitment remains.

"We are also very excited about the future of Dundee United where it matters most for our supporters - on the park.

"Recent performances have been exceptional and a joy to watch. Many fans have told us that this is the best style of football seen at Tannadice since the 80s. This and the emphasis on youth was exactly why we recruited [manager] Jackie McNamara."