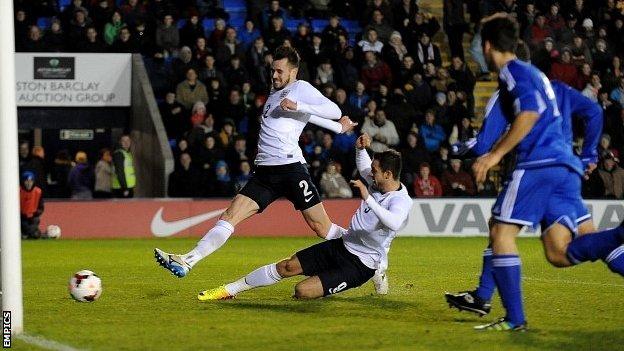 England Under-21s earned a record win as they demolished San Marino to maintain their lead at the top of their Euro 2015 qualifying group.

Boss Gareth Southgate asked his side to be more ruthless after beating Finland and they were 5-0 up at half-time.

Danny Ings and Raheem Sterling both grabbed a goal in each half with Michael Keane, James Ward-Prowse and Thomas Ince on target before the break.

Carl Jenkinson and Will Hughes also scored in the biggest win in 37 years.

England Under-21s beat Finland 8-1 in 1977 and Azerbaijan 7-0 four years ago, but this was greatest winning margin since the side began competing in 1976.

Victory keeps England in charge of Group One going into the winter break, three points ahead of nearest challengers Moldova with a game in hand.

But they were never seriously challenged by a San Marino side who barely got out of their own half.

Birmingham striker Jesse Lingaard impressed on his full debut, as did Ince, who set up four goals before being substituted in the second half.

And after a dismal European Championship last summer, it showed that not only are Southgate's side growing into a skilful team, they can follow the coach's instructions by pressing for more goals despite the calibre of their opposition.

Burnley's Ings, whose 10 league goals this season have helped Burnley surge to the top of the Championship, was keen to get on the scoresheet on his full debut and after his early shot was saved, Keane headed in Ince's corner.

Two minutes later at Shrewsbury's Greenhous Meadow Stadium, Liverpool forward Sterling played a neat one-two before receiving a couple of fortunate bounces to prod in, and Ings' header from Ince's left-wing cross was a fine finish soon after.

Southampton's Ward-Prowse then underlined his growing reputation as an expert free-kick taker by curling in from 25 yards before Ince tapped in Ings' cross.

Three minutes after the break, the goals continued as Ings beat Jenkinson to the ball to poke in after Lingaard bundled through the San Marino defence.

Ince then claimed his third and fourth assist of the night by providing passes for Sterling's lob and Jenkinson's near-post finish.

It took 74 minutes for Davide Cesarini to register San Marino's first attempt of the night, but it was miles over before Hughes smashed in a ninth goal on an entertaining night for a youthful home crowd.

Shots on Target
Home15
Away0