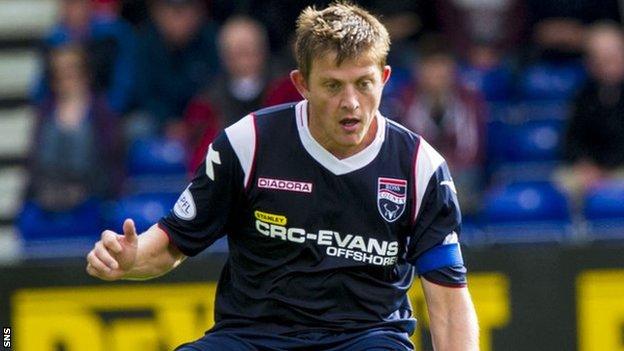 Richard Brittain refuses to make this summer's aborted move to St Johnstone an excuse for the loss of form that led to him being dropped by Ross County.

His wife wrote an internet blog condemning Saints fans for online abuse of the 30-year-old midfielder after his change of heart for family reasons.

"A lot of time has passed since then," said the County captain.

"So that's all forgotten about it and I'm just focusing on my career for Ross County now."

Brittain was on the bench as matches against Inverness Caledonian Thistle and St Mirren were abandoned.

But the returned for last weekend's 4-1 defeat by Scottish Premiership leaders Celtic.

"It's been difficult because I'm my own worst critic and, if I'm being brutally honest, my form this season has been poor," Brittain admitted to BBC Scotland.

"It's not been good enough for me and the manager rightly dropped me, so I've no complaints on that front.

It's maybe just a loss of confidence, I don't know, but I'm working hard to put that right

"Hopefully I can keep pushing myself to improve my form."

Brittain was at a loss to explain why he had been unable to repeat the level of performance that led St Johnstone to pursue his signature.

"It can be anything from a change of boots to problems away from the pitch - it could be any number of things," he said.

"But, for me, it's maybe just a loss of confidence, I don't know, but I'm working hard to put that right and hopefully I can put in a good performance if selected on Sunday."

That is when County return to St Mirren Park for a re-arranged fixture following a half-time call-off for a waterlogged pitch.

"It has been really, really frustrating, not just in the last couple of weeks but in the season as a whole because I don't think we've played four games on the trot without an international break or an abandoned game or something," said Brittain.

"So I'm glad we've got a game this weekend because it's a start of a lot of games going into the Christmas period and the new year."

County were 2-0 down in Paisley at the time of the abandonment and the reprieve gives them the chance to leapfrog their hosts into ninth in the table or even catch Partick Thistle on goal difference.

"That's the carrot for us," added Brittain. "If we go down there and manage to win the game, we jump above them in the league.

"There's no doubt it will be a difficult game because they have a squad packed with quality, but we know we can take points from them - as we did earlier in the season."