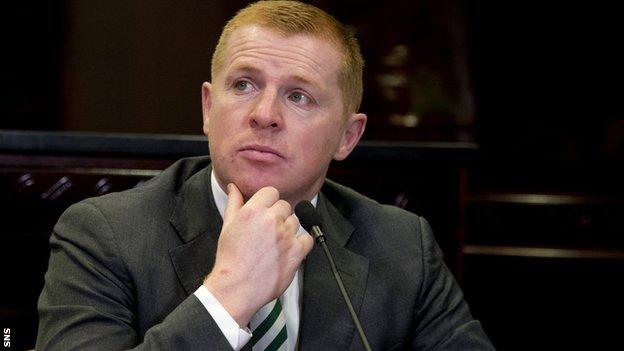 "It is up to the player and his representative to agree personal terms," Lennon told the club's AGM.

"It is not a huge outlay, but we think he is a player who will get better and, at 20, he has very good potential."

The Welshman, who joined Celtic in 2010 and has helped the club win back-to-back Scottish Premier League titles, will be out of contract at the end of the season.

"We have made him an offer, Joe is aware of that, as is his agent, and we are waiting on them," said the manager.

"We know how good a players he is. That's why we have offered him a new deal.

"My gut feeling is, looking at his body language over the last week or so, I'd like to think he would stay on."

Should a deal for 20-year-old Fridjonsson be finalised, Lennon would expect the forward to be pushing for a first-team place straight away, although Celtic would not be able to register the Iceland Under-21 international until January.

"The season is just finished in Iceland, so he may need a little bit of a break, so we may not see him immediately, but I'd like to think he would be making inroads around Christmas time," added Lennon.

"He is a good player for his age, a good size, we had him in for a week's trial and were hugely impressed by him. He is one for the present.

"Technically, he is very good, he is excellent in the air, he leads the line very well and, for the Scottish game, he likes the physical side of thing as well."